The gold price has remained flat over the last two weeks, with daily movement last week mostly alternating between gains and losses. However, the metal eventually ended the week with a small 0.2% loss.

U.S. President Donald Trump announcing on Nov. 2 that Jerome "Jay" Powell would be the next Federal Reserve chair wasn't even enough to boost gold prices. Perhaps it's because Powell – widely known as neither hawkish nor dovish when it comes to interest rates – likely won't do anything unexpected in his new position.

For now, that's kept the stock market humming higher, with the Dow Jones up 0.5% since Thursday's announcement. Another factor pushing stocks up has been the expected Fed rate hike in December, which economists predict has a 96.7% chance of happening.

However, I don't expect a December rate hike to happen.

I don't think the dollar's rally is over yet, so the price of gold's gains will stay limited for now. But selling exhaustion may be settling in, and we could be gearing up for a surprise rally before the end of the year thanks to a seasonal push.

Today, I'm going to show you my bullish target for the gold price by the end of December 2017. First, let's recap the metal's performance last week…

The gold price erased the previous session's gain on Tuesday despite the dollar hardly moving. The DXY traded around 94.56 and eventually ended the session slightly lower, at 94.55. That wasn't enough for gold traders, as prices fell back to $1,271 by the close for a 0.5% loss. With that loss, gold posted a monthly loss of 1.1% in October.

For reference, here's a look at the DXY's movement last week… 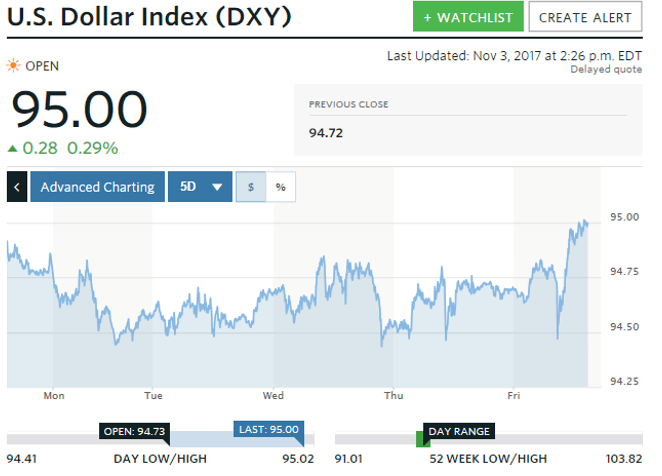 On Wednesday, Nov. 1, both the dollar and price of gold managed to bounce higher, with the DXY rallying toward 94.80 by the close. This didn't deter gold buyers, who stepped in and boosted prices 0.5% to $1,277 by the close.

The metal had a mostly uneventful day on Thursday, as both gold prices and the DXY traded in a narrow range. Despite falling to 94.50 at the open, the index fluctuated between 94.60 and 94.75 most of the day. This capped gold's movement, which ended the day just 0.08% higher, at $1,278.

Renewed interest in the dollar on Friday, following Jay Powell's Fed chair announcement, boosted the DXY to test the 95 level. That inevitably weighed on the gold price, which dropped 0.7% to $1,269 by the close. With that, gold logged a weekly loss of 0.2% from Friday, Oct. 27.

I remain cautiously bullish on gold as we head toward the end of the year. This is mostly due to stocks charging higher, which means they may be due for a sobering correction. Also, the gold price and gold stocks normally hit seasonal lows in late October before rallying higher.

Gold prices could still push much higher by the end of December, even if we see more weakness over the next few weeks.

Here's my specific gold price prediction for the rest of 2017…

This Is How High the Gold Price Could Reach Before 2018