There are a few popular names for what brick-and-mortar retail is going through right now: "Amazon-ization," the "Retail Apocalypse," or, my own personal favorite, the "Retail Ice Age."

The good news for traders is, there are even more ways to make money on companies with sagging sales and collapsing stock prices.

The thing is, not all retail stocks are headed directly for extinction. Some left-for-dead retail names have seen dramatic price spikes.

Which is more good news for traders, because it's also easy to make money on beaten-up retail stocks when they do break out to the upside.

Let me show you how easy it is to make money on the ups and downs of retail stocks - something we do all the time in my Zenith Trading Circle trading research service...

This Is a Huge, Years-Long Profit Opportunity for Traders

Since 2014, more than 600 retail brick-and-mortar companies have gone out of business; many of those were public companies with listed shares.

DEATH WATCH: These 40 stocks have a near 100% chance of working in your favor. Click here...

I keep a list of all the retail companies whose shares trade on U.S. exchanges, and I follow their earnings closely.

We also have news alert systems set up (you can do that with Google) that feed us stories about companies, including announcements about store closings. 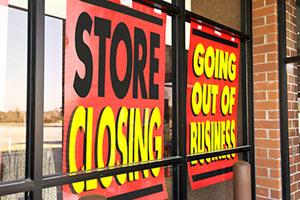 By tracking earnings reports for things like same-store sales, revenue, profits and losses, and cash flow and debt loads, we know who's doing well and who isn't. And we monitor all retailers' stocks for technical data including support levels, certain trading patterns, and when stocks are making new lows.

It's not hard to see how a company's doing when you look at its stock chart. If the stock's been falling and you know why, you can and should join in the selling, or at least put on a trade that will profit from the stock's continuing decline.

There are a couple of ways to do this. I'll show you my favorites.

Here's What the Pros Do (It's Not That Hard)

Selling short, or "shorting," is a straightforward way of betting a stock will go down.

Another way to make handsome profits betting stocks are going down is to buy put options. We do this all the time in Zenith Trading Circle.

Put options give the buyer the right to sell stock at a predetermined price - the "strike" price. We buy put options that have a strike price a little below where stocks are trading currently.

For example, if we're targeting Best Buy Co. Inc. (NYSE: BBY), which is trading just above $56, we might buy put options with a strike price of $50.

MAKE A POTENTIAL KILLING on some of the deadest "dinosaurs" in retail. Click here to find out more...

We buy puts that have expirations anywhere from a month on up to six months out.

When an option expires, you no longer have any rights to do anything.

With Best Buy, we might buy puts that expire in March 2018, which gives us until Friday, March 16, 2018, to make money on our puts if BBY shares fall.

Why? Because owning the puts gives us the right to sell Best Buy stock at $50 - and we sure wouldn't want to sell BBY at $50 when it's trading at $56.

We could do that: We could first buy stock ourselves for $40, if it's down there, and immediately sell stock at $50 to the person on the other end of our put contract.

The beauty of a trade like this is we don't have to trade any stock.

If the puts are worth $10, someone would love to buy them from us at $10 or better. That way we would only be buying an option and selling it; there would be no actual stock traded by us.

That's how we trade options in my service.

Now, let me be clear: We're not in this Best Buy trade, I'm just using it as an example.

But, looking at the chart of BBY, it looks like it's been a little wobbly lately, and if it can't hold up here at $56, it could quickly go down to $50. There's a lot of support at $50, but then again, if BBY shares break through that support, they could go down to $45, and maybe $40. 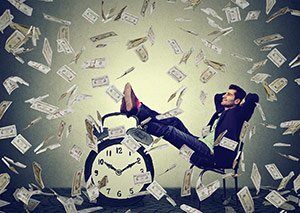 So, we just might put this trade on. You could, too, and see just how easy it is to make a pile of money with trades like this.

But not all retail brick-and-mortar companies' stocks keep going down. Some of these falling stocks leap higher, and you can make money on them when they do.

We just had a nice triple-digit gain on Abercrombie & Fitch Co. (NYSE: ANF) on Friday, when the stock soared 24% on better-than-expected earnings news.

The way we played that is a good example of how to trade some of these loser retail stocks.

We know lots of these loser stocks are being shorted by speculators who are betting heavily that they'll make a killing as weak stocks keep falling.

But all those short-sellers are a red flag for us.

That's because, if the stock they're betting will go down goes higher, they start losing money.

The higher the stocks goes, the more it goes against the short-sellers, the more they lose.

And of course, because no one likes to lose and keep on losing, short-sellers will "buy to cover" and close out their short positions that are going against them.

We looked at Abercrombie and saw there was a huge short position in the stock. More than 30% of all the outstanding shares of stock had been shorted.

That's a big short position for a little stock.

Just last Monday, before Abercrombie and Fitch's earnings were coming out on Friday, we checked the big short position and knew all about where the earnings numbers might come in.

If they were going to be good, we knew the stock would go through the roof, because all those shorts would have to buy shares at whatever price they had to pay to get out of their losing trades.

On the other hand, if earnings were a bust, we figured the stock would get hit hard.

And we bought $15 calls (which are the opposite of puts; they give us the right to buy stock at the strike price) that expire in December, for $0.23.

We did this on Monday, when the stock was trading just above $12.

As it turned out, Abercrombie and Fitch's earnings were good, and the stock went through the roof.

The calls we bought just a few days before traded as high as $1.41, good for more than 500% in gains. That would be more than enough to cover the cost of the puts which you'd still own.

We sold our calls for a nice, big profit and, for good measure, are holding the $10 puts in case Abercrombie and Fitch falls backward by January.

In that case, we're aiming to make some money on our puts, too.

That's how we're playing the "Retail Ice Age," and it's a smart way for you to get in on the action.

Editor's Note: To learn how to get all of Shah's trading recommendations for playing this huge opportunity in retail, click here.