As November's second full trading week came to an end last Friday, silver prices were on the rise. But a political crisis in Germany sent silver prices tumbling…

Between Friday, Nov. 10, and Friday, Nov. 17, the metal surged 3% to its highest level in a month. This came on the back of a falling U.S. dollar and declining stock market. The U.S. Dollar Index (DXY) – which measures the dollar against the euro and other prominent currencies – dropped from 93.93 to 93.67 last Friday, while the Dow Jones tumbled 0.4%.

But then the silver price's 3% gain from last week evaporated in one fell swoop yesterday (Monday, Nov. 19) on geopolitical concerns out of Germany…

That's where German Chancellor Angela Merkel is having trouble forming a coalition uniting her conservative party with the country's pro-business Free Democrats and environmentalist Green party. Her failure to unify Germany's major political parties leaves her potential fourth term as chancellor in doubt.

While these concerns often cause unease among investors, drawing them into silver, the news out of Germany weakened the euro, which only made the dollar more attractive. This pushed the DXY above the 94 level, punishing the price of silver in the process. It fell 3.1% to a two-week low of $16.84 yesterday.

I still think silver prices will rebound from here. The political uncertainty right now should renew safe-haven buying, eventually pushing the metal toward our bullish target by the end of 2017.

Not only will I show you our 2017 target, but I'll also show you why I think silver could rise more than 180% over the next few years.

On Wednesday, early morning weakness dragged the DXY down to touch 93.50 near the opening bell. But it edged back up throughout the day to close mostly flat, at 93.81. This dragged silver prices 0.6% lower, to close the session at $16.97.

Check out the DXY's behavior over the past five trading days, especially its attempt at breaking the overhead resistance, at 94, multiple times this past week… 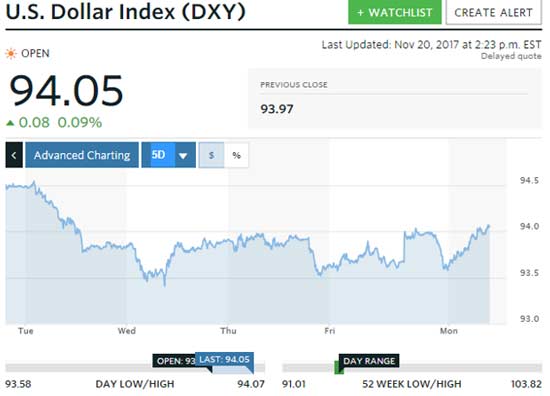 Silver buyers came out in hordes on Friday, Nov. 17, as the dollar and U.S. stock market fell in unison. The price of silver rocketed 2.2%, to close at $17.37 – the highest settlement since Oct. 16. With that, the metal logged a weekly gain of 3%.

Silver's constant flirtation with $17 over the last week shows just what kind of short-term volatility silver investors are in for. Waiting through the short-term drops is something we talk about a lot here at Money Morning.

But looking at silver prices in 2017 overall, they're currently up 6.3%. And I think silver could keep running higher, not just through the final month of the year, but also through the next two years.

In fact, I think the price of silver could post an incredible triple-digit rebound by 2020…

My Bullish Silver Price Predictions for 2017 and Beyond