The price of gold is up thanks to the Federal Reserve, just like we predicted.

The FOMC raised rates on Dec. 13, as expected. In the days leading up to the meeting, the U.S. dollar rallied, and gold sold off. 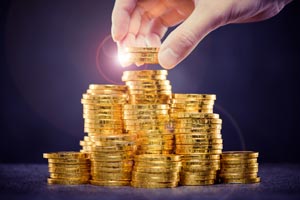 But then both of these reversed direction, with the dollar retreating and the gold price rallying.

For those of us watching this space carefully, it has played out pretty much as anticipated. Over the past two years, mid-December rate hikes helped launch powerful rallies in gold and gold stocks.

Act Now: The Night Trader Is Coming (Be Prepared)

And if history is any guide, by late February, we could see gold rally between 8% and 20% from the gold price today, and gold stocks could surge anywhere from 30% to 40%.

We'll show you exactly why in just a second, but here's how the Fed boosted gold prices over the last week...

The big catalyst for gold prices last week was the Fed's rate hike decision, but here's how gold's price moved over the week.

The yellow metal opened with a bit of strength on Monday, Dec. 11, at $1,250 an ounce. But the pre-Fed dollar rally would cut gold's strength short.

Don't Miss: Executive Editor Bill Patalon just saw something on his precious metals charts he's only seen twice in 20 years. He calls it the "Halley's Comet of investing" - and it could lead to windfall profits. Read more...

On Tuesday, gold prices were volatile, as the DXY shot above 94.

But it was Wednesday that brought out the fireworks.

The dollar sold off early in the morning, but remained above 94. Then after the Fed's statement, it sold off further, eventually hitting 93.45 around 5:00 p.m. The Fed rate hike was no surprise, but the FOMC's statement, in which members projected tame inflation expectations in the near and medium terms, was unexpected.

Here's a look at the DXY over the last week, where you can see how the dollar lost value after the FOMC's announcement on Wednesday. 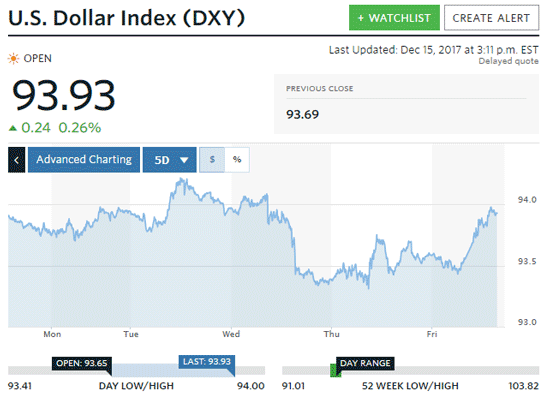 Then on Friday, gold opened a bit higher as the dollar weakened slightly.

The yellow metal started the trading day at $1,261, but sold off as the DXY found some renewed strength. By late morning, the DXY was at 93.90 thanks to optimism over tax-cut legislation, pushing the price of gold back down to $1,254. At mid-afternoon, gold was changing hands at $1,256.

But just as history showed us a mid-December rate hike would boost gold prices, so too will it boost prices through 2018. Here's why we're expecting a gold bull market to really kick off in 2018...

Why the Price of Gold Is Heading Higher in 2018