It's just what investors need: A Bitcoin value chart that can detect when the cryptocurrency is in bubble territory. 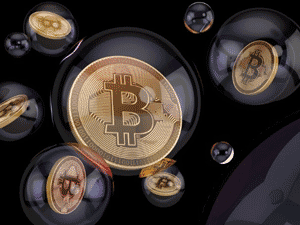 One the most vexing things about investing in Bitcoin is that unlike stocks, it has no fundamentals you can analyze to determine a fair market price.

And with the price of Bitcoin ranging from less than $1,000 to nearly $20,000 just in 2017, there's never been a greater need for a tool that can ballpark whether the Bitcoin price is too high, too low, or fairly valued.

That's one of the reasons Willy Woo, an independent cryptocurrency investment researcher, created something he calls the NVT ratio (Network Value to Transactions ratio).

How the NVT Ratio Determines the Fair Bitcoin Value

Woo was seeking a Bitcoin equivalent to the price/earnings (P/E) ratio used to value stocks.

The issue with cryptocurrencies, of course, is that while they all have a price, they have no earnings. After doing some research, Woo came up with a substitute for earnings.

"Since Bitcoin at its essence is a payments and store of value network, we can look to the money flowing through its network as a proxy to 'company earnings,'" Woo wrote in an article published on Forbes.

This number is called the daily transaction value, and the Blockchain.info website calculates an estimate every day in U.S. dollars.

To get the NVT Ratio, Woo divides Bitcoin's market cap (the value of all Bitcoin ever created times the current price) by the daily transaction value.

The normal range for the NVT ratio is between 30 and 95, according to Woo. Only when it breaks out above that range do we have a bubble.

Woo's long-term NVT ratio chart, which goes back to Bitcoin's launch, shows the cryptocurrency has had only two real bubbles in its history. 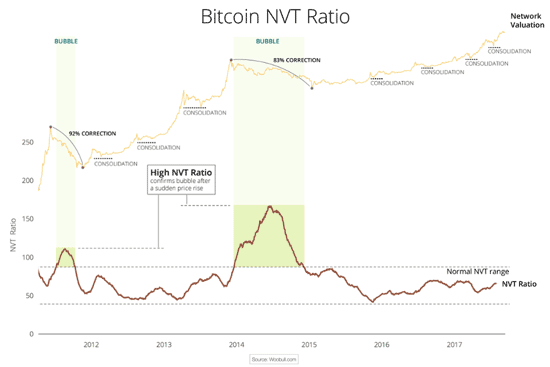 "If the ratio climbs above the normal range, it's a sign that the transactional activity is not sustaining the new valuation, and we can expect a lengthy price correction," Woo said.

The other seven major pullbacks were all episodes of consolidation. In each case, the Bitcoin value stayed within the normal range, kept in check by the rise in daily transaction value.

While these pullbacks were often quite steep - the one in early 2013 was 83% - they were short-lived compared to the two bubbles.

All of which brings us to several key questions: Where is the NVT ratio now? And was the most recent run-up in the Bitcoin price (from $8,000 to nearly $20,000 in less than a month) a bubble or not?

Let's see what the numbers tell us...

Is the Bitcoin Price in Bubble Territory Now?

All these charts are great, can we get an old report so that we can verify it as well?

Thanks for reading Money Morning. The chart featured in this story is based on the complete price history of Bitcoin. I'm not sure what you're looking for, but if you can be more specific I will track it down and post it here.