Bitcoin prices today slumped below $9,000 as the crypto market continues to experience a massive downturn.

Fears of stricter regulations in China and South Korea have sent prices lower, and the crypto community is also concerned about Tether being a Ponzi scheme. 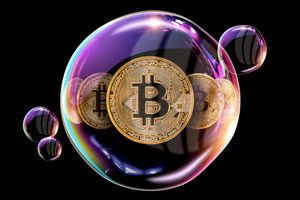 Developers of Tether have claimed that the cryptocurrency is backed by the U.S. dollar.

However, some believe that hundreds of millions of dollars in new Tether coins were created and injected into the market.

The CFTC subpoenaed Tether (USDT) and crypto exchange Bitfinex on Dec. 6, 2017, but the supply of USDT still surged by 34.5% after the subpoena.

As a result, these coins were likely used to purchase other cryptocurrencies, which may have fueled a rally in prices in November and December.

The CFTC also recently announced plans to create a "heightened review process" for cryptocurrency futures like those launched and traded at the Chicago Mercantile Exchange and the Chicago Board of Exchange.

In other cryptocurrency news, markets continue to monitor capital inflows from institutional investors and the success of Venezuela's pre-sale of the "Petro."

The Petro is an oil-backed cryptocurrency launched by the country's government on the Ethereum blockchain. It is designed to circumvent international sanctions against the socialist regime in power.

Below is a recap of the top cryptocurrency prices at 11:00 a.m. EST.

On Friday, the market capitalization of the global cryptocurrency sector plunged to $432.3 billion.

Bitcoin represented 35.0% of the total cryptocurrency market, with a market capitalization of $151.16 billion.

DigixDao, which gained 25.10%, was the top performer today. The cryptocurrency, which developers claim is "gold-backed" was also the best-performing cryptocurrency yesterday.

It looks like leaders of the global financial system could finally have a deeper conversation about the future of cryptocurrencies.

U.S. Treasury Secretary Steven Mnuchin hinted this week that he will pitch a discussion on cryptocurrency regulation during the March G20 Summit in Argentina.

Though the G20 has addressed the subject dating back to 2015, Mnuchin's suggestion comes after the U.S. government recently formed a working group to focus on the role of cryptocurrencies in the financial system.

A tiny company's game-changing device has just been approved by the FCC... and it's set to spark the most monumental technological transformation you'll ever see.

This is the only device of its kind to receive this historic approval, and the floodgates are set to open any minute.

With one tiny company at the heart of this revolution, even a small stake could reward you with astronomical gains.

You need to hurry if you want to find out how to take advantage of this ground-floor profit opportunity...