Legendary software leviathan and crypto-wiz John McAfee offered up a bold prediction about the fate of digital coins the other day.

A bold prediction that, on a broader scale, makes a lot of sense. 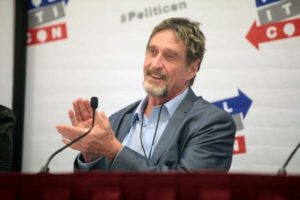 Specifically, McAfee told RT on Jan. 25 that "in five years' time, over half the world, I promise you, will be using cryptocurrency."

The legendary security software pioneer continued, "And the half that does not is going to be the half that probably doesn't have smartphones or any access to the Internet."

That's quite an intrepid prediction; we doubt that economic powerhouses like the United States and China are going to allow cryptocurrency to replace fiat.

But we think McAfee's got a point on his global scale forecast – only it will be the world's developing economies using blockchain technology in day-to-day transactions.

Here's how the third world could bring cryptocurrency to new heights…

Crypto Will Rule the (Third) World

At this very moment, global money systems are undergoing an unprecedented transition from centralized to decentralized.

Cryptocurrency and the emergence of its infrastructural blockchain are the major players behind this sea change.

And developing countries are opening up to this transition faster than their more stable, international counterparts.

The country is suffering a dire shortage of bank notes after its central bank failed to issue enough cash to keep pace with surging inflation.

ATMs are empty across the capital, Caracas, and local banks limit customers to withdraw the equivalent of just a few cents a day. The International Monetary Fund (IMF) predicts inflation will spiral to 13,000% by the end of this year, while the economy is set to contract 15%, reported Bloomberg on Jan. 30.

So Venezuela's dictatorial leader, Nicolas Maduro, has opted to take on crypto culture with a digital coin backed by Venezuelan oil barrels, which currently go for about $60. This new digital currency, the Petro coin, will go on sale to select institutional investors on Feb. 20 – just a few weeks away.

And because the Petro – like all crypto coins – will be decentralized, Maduro might be able to work around the harsh sanctions placed upon his government by Washington in recent months.

Other countries are in the midst of such sanction-evading "crypto schemes" as well, like Iran and Russia.

Indeed, in five years' time, the crypto world may look entirely different than it does today. McAfee's got the right idea.

But it won't be the cellphone-laden developed nations holding all the digital moolah; it will likely be the little guys looking to get ahead.

The need for a functional currency is an "Unstoppable Trend" for which crypto is the only answer in many parts of the world.

It's this kind of monumental shift that will send cryptocurrencies to unprecedented highs, so it's critical to get in on cryptocurrencies like Bitcoin – or the more versatile Ethereum – before these sea changes take place.

Now, there's no guarantee this will be a smooth ride, so we recommend only contributing 2% of your portfolio to cryptocurrencies.

Still, if you've got the means to invest in digital assets, you may very well thank yourself in the not-so-distant future.

Very interesting an informative. I will be making a move on this when the markets open on Monday.

What is the name of the fund??

I joined NOVA-X as a member.
I hope to receive the newsletter by mail

Can you please send the link to Washington times post, not doubting on this article :), just want to read that as well. Thank you

Is there a better word for stupid than stupid?

And as described it would be issued by Venezuela a Nation. So this guy McAfee is really stupid.

People are not like to exchange something of value for an unknown electronic IOU which is what these cryptocurrencies are but there is no address to go to to break their legs. The gamblers will be wiser for a decade.

Do you know anyone offering seminars c
Cup.currency trading to get started ?