The U.S. Navy is heading toward war in the South China Sea at a faster pace than ever before.

For years, China has been building islands and military bases in the South China Sea, outright ignoring the claims of neighboring nations and even the ruling of an international court. 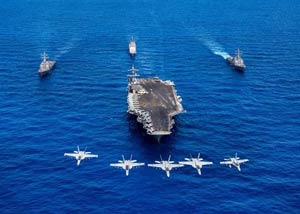 And now, the United States is stepping up its efforts to contest China's aggressive moves.

Yet recent developments in the region have largely gone unnoticed – especially by American mainstream media. Between last week's market volatility, this week's tragedy in Florida, and the ongoing Winter Olympics, the South China Sea dispute has gone woefully underreported.

In fact, even the Navy's top commander is now warning about the consequences of ignoring the regional roiling conflict.

Check out these two disturbing developments that have flown under the media's radar in recent weeks, and how the United States will suffer if nothing changes…

The Alliance that Could Set Fire to the South China Sea

The United States and Vietnam – the two countries that have defied China the most – are officially teaming up. This marks the first time the U.S. military will have a physical presence in the Communist nation since 1975.

This is likely because Vietnam is among the only South China Sea nations remaining steadfastly defiant of the Red Dragon.

Even the Philippines – who originally brought the conflict to the International Court of the Hague's doorstep in 2016 (and won) – has done a 180, actively aligning itself with China in order to reap massive investments from Big Brother Beijing.

But not Vietnam. Vietnam has pursued the creation of an official code of conduct in the South China Sea – one that would reign in China's island-building and warship posturing.

And in its persistence, Hanoi has made an enemy of Beijing.

But it's also found a friend in Washington, who wants to keep the region open for international trade.

Now, the U.S. Navy's sole nuclear-capable warship – the U.S.S. Carl Vinson – is expected to dock in Vietnam next month, according to East Asian news outlets The Nikkei Asian Review and The Diplomat.

In response to the news of the Carl Vinson's arrival in Vietnam, China deployed its new fleet of Su-35 Flanker-E jet fighters and Chengdu J-20 stealth fighters over the South China Sea. These are brand-new war planes the world had not yet seen in action.

These new war machines have the military brass wondering just what would happen if the United States and China came to blows.

Yesterday, in fact, the U.S. Navy's top officer warned precisely what would happen if the U.S. military failed to properly prepare for a war in the South China Sea…