Sure, POTUS said on March 1 that he was proposing the 25% tax on steel and 10% levy on aluminum in order to bolster the U.S. steel and aluminum production industries.

But Chinese steel exports to the United States are negligible – just 1.1% of the world's availability, according to a report from Global Steel Trade Monitor released this month.

So the actual impact of the tariffs would ultimately be too small to affect meaningful change in the U.S. economy.

But while the pundits and politicians are arguing that these tariffs "won't work," we know the truth.

Trump Is Sending China a Message 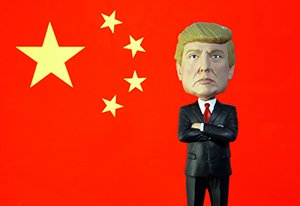 The real reason for Trump's tariffs has to do with the U.S.-China trade deficit.

The monthly trade deficit with Beijing surged 16.7%, to $36 billion, in January 2018 – its highest level since September 2018, reported CNBC today. These numbers suggest that, so far, Trump's policies have not yet yielded material impact.

Nonetheless, this trade gap remains a major sticking point for the president, who's determined to see the deficit with China (which is roughly $374 billion) reduced by one-third, or about $100 billion, this year.

"Trouble Is Brewing": According to Bloomberg's latest report, America could be heading for an economic disaster that would rival the Great Recession. To see why we believe some of the richest players in the world are preparing for a market collapse, click here.

Considering the aluminum and steel tariffs could have a negligible impact on China, what we're seeing is a shot across Beijing's bow, as opposed to hitting the Red Dragon where it would hurt.

The warning: The White House is no longer messing around when it comes to reducing the trade gap.

POTUS has been ramping up this message for a while now. In January, he signed a pair of actions into effect that imposed trade restrictions on Chinese imports of washing machines and solar panels, as well.

China, however, has resisted Trump's claims about the U.S.-China trade imbalance…

The Red Dragon claimed today that the trade deficit numbers are a result of "Americans' lavish spending on foreign-made goods" and that the imbalance "can't be solved by punishing China," The Wall Street Journal reported.

China even went so far as to post data showing that its monthly surplus with the United States narrowed ever so slightly in February as well – to just below $21 billion from $21.9 billion in January, even as its broader surplus with the world widened.

But Beijing isn't the only one playing defense to Trump's tariffs.

Fortunately, that provides you with amazing buying opportunities.

Money Morning Chief Investment Strategist Keith Fitz-Gerald has identified the perfect stocks to buy when the market takes an irrational downturn like the one caused by tariff hysteria.

"There is no doubt in my mind that the markets are giving you an engraved invitation to buy a few world-class stocks at 'super-silly' prices," he says.

Keith loves the "Amazon of China" for its astonishing growth metrics.

"The company's growth is jaw-dropping," he says. "Its cloud computing platform grew by 99% in Q3 2017, while international growth came in at 115%. Further, it added 20 million mobile users to bring the total user count to 549 million, or roughly 56.47% more than the total 310 million estimated Amazon users."

Alibaba currently trades around $186. However, analysts see the stock heading as high as $259 in the near future – a nearly 40% increase.

There Is No Place for Fear, Panic, or Mistakes

Because a market signal that showed up before the Great Depression… before the dot-com crash… and before the 2008 financial crisis has just appeared again.