The price of Bitcoin fell under $8,400 after Google announced plans to ban cryptocurrencies, starting in June.

The move comes two months after Facebook Inc. (Nasdaq: FB) issued a similar policy. The search giant will be altering its Google AdWords and other policies, which would "restrict the advertisement of Contracts for Difference, rolling spot forex, and financial spread betting." 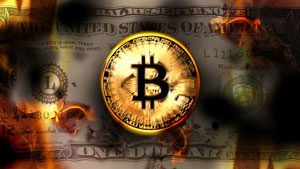 The company said that "Cryptocurrencies and related content" will be part of the restrictions.

Scott Spencer, Google's director of sustainable ads, spoke with CNBC on Tuesday and explained the thinking behind the company's decision.

"We don't have a crystal ball to know where the future is going to go with cryptocurrencies, but we've seen enough consumer harm or potential for consumer harm that it's an area that we want to approach with extreme caution," he said.

Here is a recap of the top cryptocurrency prices at 2:30 p.m. EDT.

On Wednesday, the market capitalization of the global cryptocurrency sector fell to $338.15 billion.

Bitcoin comprised 42% of the total cryptocurrency market, with a market cap of $149.56 billion.

The top performer of the day was Power Ledger, which only gained 5.23%. Only three of the top 100 largest cryptocurrencies by market capitalization showed gains. Ardor added 3.16%, and Tether added 0.43%.

Must Read: Bitcoin Taxes Will Create Nightmares for Investors – What to Do

Nelson sent a letter to U.S. Treasury Secretary Steven Mnuchin this week and demanded to know what the Trump administration plans to do about the "Petro."

The Petro is a cryptocurrency launched by Nicolas Maduro's government earlier this year.

Nelson said that Venezuela and Russia have used cryptocurrencies to avoid sanctions.

He has taken a special interest in Maduro, whom he says "is responsible for persistent human rights violations, political repression and the jailing of opponents, undermining democratic institutions, corruption, and widespread economic deprivation."