Painful Bitcoin taxes will bite many unsuspecting investors next year unless they take action to mitigate the impact before the end of the year.
This is especially true for the 2017 tax year, in which extraordinary gains have been the norm. 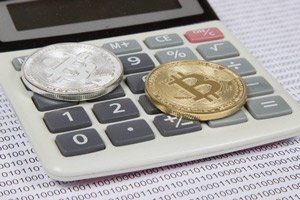 Other cryptocurrencies have had much bigger gains. The Ethereum price has soared from $8 on Jan. 1 to $225 now - a gain of 2,700% in less than nine months. The price of Ethereum peaked at $400 in June.

Meanwhile, the initial coin offering (ICO) craze meant a lot of new cryptocurrencies entered the market, dozens of which racked up mammoth gains in a matter of weeks or even days.

The total market cap of all cryptocurrencies, including Bitcoin, was about $18.2 billion at the start of the year. Today it's $113 billion, an increase of 520%.

While racking up such huge gains feels great, those profits are taxable.

And next April, the IRS won't be looking the other way...

Why the IRS Will Take Bitcoin Taxes Seriously This Year

The IRS first issued guidance on how to treat Bitcoin gains in 2014. That document declared Bitcoin to be an intangible property, making it plain that gains in Bitcoin or any other cryptocurrency are taxable and must be reported.

The IRS knows people are making heaps of money from cryptocurrencies, and it is determined to collect taxes on those profits.

Since then, the IRS has grown increasingly concerned that cryptocurrency investors are failing to report their profits. That's why the IRS filed a civil petition against Coinbase last November, compelling the cryptocurrency wallet and exchange company to turn over customer records.

In March, in new court documents related to the Coinbase case, the IRS said an investigation had revealed that just 807 taxpayers had reported any Bitcoin transactions in 2013, 893 in 2014, and 802 in 2015 - despite steadily rising cryptocurrency usage.

Coinbase has more than 10 million customers. Although Coinbase operates in 32 countries, it's likely the majority of those customers live in the United States.

In July, the IRS amended its request to just those customers that had conducted at least $20,000 worth of business between 2013 and 2015.

No matter how this case gets resolved, it tells us one thing loud and clear: The IRS knows people are making heaps of money from cryptocurrencies, and it is determined to collect taxes on those profits.

Unfortunately, a lot of gray areas remain when it comes to Bitcoin taxes. Here's what we know - and the best ways for investors to proceed...

How to Report Your 2017 Bitcoin Taxes

The first thing to note is that choosing not to report cryptocurrency gains is a bad idea. You might get away with it - but you might not.

With some exceptions like Monero and Dash, cryptocurrencies aren't as anonymous as people think. And the IRS knows what it is doing.

The Daily Beast reported last month that the IRS has enlisted the services of a company called Chainalysis to help it "trace the movement of money through the Bitcoin economy."

If you have made a lot of money - tens of thousands or more - and that money starts showing up in your bank accounts, the banks are required to report it to the IRS.

And if you're caught, the penalties are severe. You can get slapped with a negligence penalty of 20%, as well as a substantial understatement penalty of 20% for understating your income by 10% or more.

It's best not to tempt fate.

But figuring out what you need to report, and where to report it, is no easy task. The IRS has yet to clarify numerous issues.

Let's look at some specific circumstances...

If you bought Ethereum, Litecoin, or any other cryptocurrency with your Bitcoin, that counts as a "taxable event," which means you must pay taxes on the gains. You need to calculate the difference between what you paid for the bitcoins and their value when the exchange for another crypto took place.

By the way, this is true for all cryptocurrency trading. If you used Ethereum to invest in an ICO, you owe capital gains tax on the difference between what you paid for that Ethereum and how much the ETH was worth when you invested in the ICO. If you used Litecoin to buy Monero, same thing.

Unlike brokerages, who send you a convenient statement of your annual transactions for tax purposes, the record-keeping for cryptocurrency trading is all on you.

If you sold or traded your Bitcoin Cash - which many people did - any gain from that is capital gain that must be reported separately. So if you sold them at $500 in the weeks after the hard fork, our hypothetical five BCH would result in a capital gain of $1,170 (the $234 gain over the basis cost of $266 times five).

All that said, here's what Bitcoin and cryptocurrency investors need to do before Dec. 31...

What Bitcoin Investors Can Do to Protect Themselves

Please inform me as to owning Bitcoin in a Roth IRA. Are those gains to be reported?

Bitcoin in IRAs get the same treatment as any other asset included in an IRA. Because Roth IRAs are funded with after-tax money, gains from Bitcoin held in a Roth IRA won't be taxable. In the case of Bitcoin, which is expected to register huge gains over the next decade or so, a Roth IRA should prove a brilliant way to minimize taxes. I wrote specifically about Bitcoin IRAs earlier this year.

Tax on Bitcoin? I just can't believe it. Of course these filthy thugs known as the Tax Department will steal all they can get their filthy little hands on to keep this facade of finance and tax's going until the volcano erupts or the people hang them!

PS, I vote for the hangings!

Do you only have to report the gains when you sell?