News of the Saudi crown prince's visit to the United States has dominated headlines this week.

It's not surprising, either, since industry insiders expect he's here in part to sell the upcoming Aramco IPO. The Saudi Arabian oil company is not just the world's most profitable company, its valuation is also an astronomical $2 trillion. You see, it has unfettered access to Saudi Arabia's 265 billion barrels of oil reserves.

An offering of just 5% of the company could be worth $100 billion. That crushes the record for largest IPO ever, set by Alibaba Group Holding Ltd.'s (NYSE: BABA) $25 billion IPO.

You've likely heard all of this before. If you're a Money Morning subscriber, you've read all about the Saudi Aramco IPO, the battle over where to list the company, and the brains behind it, Mohammad bin Salman.

But what you might not know is that while the Aramco IPO will shatter records with its eye-popping valuation, that's not where the real profit opportunity lies.

That's right: Your biggest opportunity to profit from this historic IPO actually won't be from owning the stock.

You see, Saudi Arabia is selling Aramco to finance its sovereign wealth fund, a crucial part of Mohammad bin Salman's plan to diversify the Saudi economy.

It will instantly become the biggest fund like it on the planet. And knowing where this massive fund will deploy its money is the key to your next profit play.

Just look at how the new fund will stack up to the rest of the world after the IPO... 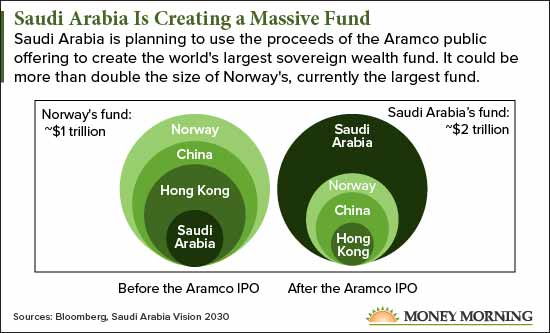 That's simply an incredible amount of money. And the Saudis won't be sitting on it, either - they're going to pour it into new investments.

Fortunately, we've uncovered a backdoor way to grab a piece of this historic windfall.

On top of all that, he's won presidential citations from Nixon, Reagan, and Clinton for his service to the country.

In short, when Dr. Moors talks, we listen. And when he talks about how to profit from this incredible wealth creation event, we take notes.

By his estimation, you could end up with a life-changing, combined 1,329% payday with these four backdoor plays on the biggest IPO in history.

And Kent sat down with Money Morning to share his insight on the IPO, this massive $2 trillion fund, and how you can turn it into your next profit opportunity.

Yeah this is a scam, please don't believe this. It says right in the article that Aramco would "only" raise 100bn. Even if Aramco was worth 2 trillion, 95% of it is still owned by the Saudis.