Congress made a dangerous move with its $1.3 trillion omnibus spending bill that will almost assuredly result in a government shutdown. 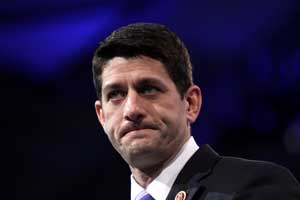 Bur it could procrastinate no longer. The deadline is March 23 – tomorrow – at midnight.

So the top brass from both parties and chambers met to draft the legislature at warp speed.

If the bill doesn't pass the Senate tomorrow, the U.S. government will shut down.

And thanks to Congress' procrastination, that's becoming more likely with each passing moment.

Here's why a government shutdown is imminent, and what you can do to protect your finances when Uncle Sam closes its doors…

Furor Against the Spending Bill Is Strong in Both Chambers

When it came to the bartering process between leaders last night, the time crunch led to Ryan and McConnell's acquiescence to Schumer's behind-closed-doors grandstanding.

Speaker Ryan lamented to FOX News this morning that he and McConnell tried to get more border wall funding in the bill and were offering to extend protections for undocumented immigrants under the rescinded Deferred Action for Childhood Arrivals (DACA) program in return.

But Schumer didn't take it.

"The president and I and other leaders in the House and Senate offered that to the Democrats, and they said no," Ryan said. "We said 'let's do multi-year funding for the wall for multi-year relief for the DACA kids' and they walked away from that, they wouldn't take that."

Because the negotiations had to keep moving forward last night, the party leaders left little money for U.S. President Donald Trump's promised border wall in their final bill and absolutely no protection for DACA immigrants.

Although the House just passed the spending bill, its outlook in the Senate is decidedly grim.

Already, Senate detractors are speaking up – against both the spending bill and the passage process itself.

Ahead of Wednesday's last-minute, late-night powwow, Sen. Rand Paul (R-KY) told the media on Tuesday that "[this passage process was] a rotten, terrible, no-good way to run your government. Really, should we be looking in thousand-page bills with 24 hours to decide what's in them?" reported The New York Times.

Stay One Step Ahead of the Politicians: Get real-time updates on how Congress is affecting your money with our free Profit Alerts.

It was Paul who caused a brief government shutdown in February, when he refused to agree to a unanimous consent request that would have sped the chamber toward a final vote.

Sen. John Kennedy (R-LA) joined in Paul's castigation of the process, claiming that whoever designed it "is not qualified to run a food truck. It's embarrassing. And as bad as it looks from the outside, you ought to see it from the inside."

When asked if he'll still vote on the bill, Kennedy said, "No chance. I don't even know if we'll have time to read it," reported Roll Call today.

There's no telling how many more naysayers are quietly waiting their turns to speak up tomorrow night.

Which means we constituents would do well to get prepared for the government shutdown.

"The last major government shutdown, as costly and embarrassing as it was for this country, created some quick double-digit profit opportunities for savvy investors," Money Morning Chief Investment Strategist Keith Fitz-Gerald said of the 2013 shutdown.

And the upcoming shutdown threat is likely to bring opportunities for double-digit profits as well. The trick to capturing these profits is to prepare now.

Keith recommends placing lowball orders on valuable companies that will take a hit if the government comes to a screeching halt.

Once everything is back to business as usual, these stocks rebound, and you reap the rewards.

And Keith has just the firm to get in on if you want to play the impending government stalemate. This firm has several government contracts on the books, so a shutdown could easily trigger a knee-jerk pullback, which means a surefire profit opportunity for investors…

Readers of Keith's Money Map Report were introduced to Sterling back in August, when it was trading for roughly $10 a share. At $11.96, it's up over 23% in just six months!

But an impending government shutdown could give investors another buying opportunity.

That's because Sterling's bread and butter is civil construction and infrastructure throughout the western United States, so many investors see it as a play on President Trump's infrastructure projects. Since the expected revenue from government contracts is already priced into the stock, a freeze on government spending could send the stock to the floor…

…where you could pick it up at a nice discount, right before it leaps back up once Congress pulls itself together again.

This is what we get for allowing ourselves to depend on our worst enemies, the politicians of both parties. NEVER, NEVER VOTE FOR A PARTY MEMBER AGAIN. They have mostly themselves and their financial backers in mind in all their decisions, not the voters who actually elect them.
Chuck Burton