The stock market has been especially volatile this year, and that's proving to be a boon for the price of gold…

The CBOE Market Volatility Index (VIX) more than tripled its January average on Feb. 5, when the Dow Jones sank more than 1,000 points. The VIX is still nearly double its Jan. 1 level.

Since the start of 2018, there have been some 100 trading days with a daily movement of at least 1%.

Volatility indicates uncertainty, and precious metals tend to thrive in that kind of environment.

Meanwhile, the U.S. Dollar Index (DXY) continues to hover in a holding pattern after retreating by a full 100 basis points in the past week.

While the dollar is moving sideways in its near-term action, it's likely headed lower in the medium term, and that should help support higher gold prices.

These are excellent trends supporting my 2018 gold price prediction. And I'll show you exactly how they impact my latest gold price target right after we take a look at last week's highlights for gold prices…

After climbing stealthily on Monday (April 9) and Tuesday (April 10), gold prices soared on Wednesday (April 11) to a seven-week high as U.S. President Donald Trump tweeted his plan to attack Syria.

The uncertainty surrounding a potential military conflict in Syria spurred gold buying, as it's traditionally a safe-haven holding. 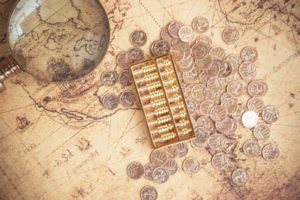 Analysts believe weaker data could cause the U.S. Federal Reserve to raise rates more slowly, hurting the dollar and helping gold. Spot gold prices were up 1%, while gold stocks jumped 2.2% as the Dow Jones Industrial sank 1%. 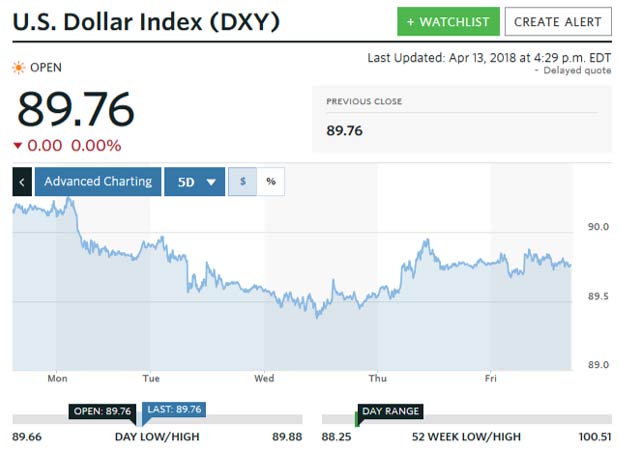 The bullish sentiment behind gold gave way to optimism in the stock market on Thursday (April 12).

The dollar enjoyed a bounce as stocks gained again, and both weighed on gold as it gave back two days of gains. But on Friday, markets opened higher, then reversed and ultimately closed down. Gold enjoyed a renewed bounce, ending the week at $1,345 as the DXY softened to around 89.75.

While gold prices saw a modest gain last week, all signs are pointing to an even more lucrative future for the yellow metal.

Here's exactly what I see in store for gold prices this year, including my updated price targets…

The Cards Are Falling Just Right for Gold Prices in 2018

Dear Mr. Krauth,
Notwithstanding your bullish report the manipulators again succeeded in bringing down the gold- and silvermarkets. I thanks you for your excellent marketviews,however, you again overlook the manipulators. If practically everybody in "Money Morning" is writing about a collapse of the economy of the USA, how for heaven´s sake can the Dow Jones go up?. Is this also manipulation? Every day I understand less and less of the markets. I still ask myself whether the FED is also manipulating the markets thru several commercial banks. If you can find some time can you explain to my e-mail adress to me what really is going on.. Best regards HdB