The growing trade war between the United States and China has the stock market on a roller coaster this year.

The Dow has tumbled nearly 10% since hitting its peak on Jan. 26, and investors are growing accustomed to 200-point daily swings.

But this volatility is nothing compared to the economic crisis bubbling in the near distance. And this event could devastate the portfolios of investors everywhere...

The Next Economic Crisis Is Almost Here

One of the best measures of this is the debt-to-GDP (gross domestic product) ratio. This measures a government's overall debt as a percentage of the country's economic output.

It's the perfect debt metric for understanding risk, for two reasons.

First, it's a relative measure. Comparing raw debt balances across hundreds of years is difficult thanks to economic growth and inflation. For example, $1,000 in 1800 would be worth $19,302 today, making comparisons between debt levels in the past meaningless.

But by expressing debt as a percentage of GDP, we can control for the changing value of the dollar and compare debt levels across time.

"Trouble Is Brewing": America is headed for an economic disaster bigger than anything since the Great Depression. If you lost out when the markets crashed in 2008, then you are going to want to see this special presentation...

Second, it helps us understand the risk behind the debt.

Debt is riskiest when the debtor can't afford to pay interest on the loans, and governments have more money when their economies are growing. By looking at debt in terms of GDP, we can see when a country is taking on more debt than economic growth can help pay back.

Some economists, like the UN's Anis Chowdhury, argue a debt-to-GDP ratio of 60% is the optimal limit for a healthy economy.

And it continues to grow...

If the trend holds, debt will shatter its World War II record by 2031, putting the United States into uncharted waters.

Just take a look at how dire the situation is in the chart below... 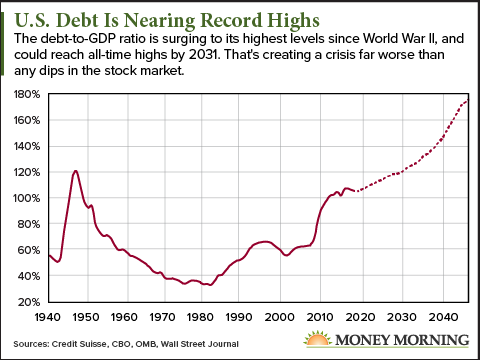 Right now, the debt-to-GDP ratio is higher than it was during the Civil War, World War I, the Great Depression, and the Great Recession.

You see, to fight the war, the United States had to borrow a ton of money, but the debts were quickly repaid as the war ended. Plus, the economy in the 1950s surged to new heights - growing as much as 20% per year - meaning the higher debt balance wasn't so insurmountable anymore.

Neither scenarios are true today.

GDP growth today ranges between 2% and 5%, not even close to the double-digit growth in the post-war years. And there isn't a massive, global war effort to wind down that would save money. Instead, the government's spending is primarily concentrated in Medicare, Social Security, and defense.

That's a recipe for disaster.

And it's not the only troubling event on the horizon...

As you'll soon see, America is set to face an economic upheaval the likes of which no one alive has ever experienced.

But no one will admit that this future is rapidly approaching.

The Dow has closed higher and higher every day.

And the media has told us that our economy has recovered.

But when you look at the hard data, which we have just done, you quickly realize that "recovery" couldn't be further from the truth.

It was all a mirage.

The economic recovery - supposedly driven by market gains - is as flimsy as a stage prop.

It looks real from afar.

But it can be knocked down with just the slightest touch.

Fortunately, you can protect yourself and your family.

But there's no room for fear, panic, or mistakes. You must act now.