I recall the presentation vividly.

It was November 2007 and I was standing in front of a packed room at a really swank resort along the Mexican Riviera. Money Map Press was in its infancy, and I was making my first public appearance as its chief investment strategist.

The markets were rocketing higher, the money was easy, and investors were greedy.

Until I got on stage.

I dropped a financial bomb of epic proportions by telling my audience two things: 1) the rally they were counting on was about to come screeching to a halt; and, 2) they'd best shift their attention to harvesting profits.

You could have heard a pin drop.

Then, I threw the following chart up on the projector, knowing full well that a picture is worth a thousand words... or at least a few million dollars in the hands of savvy folks. 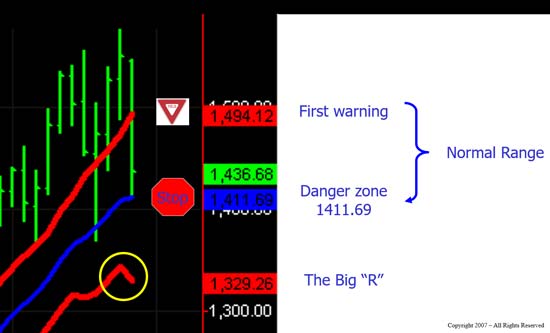 It was tough stuff made doubly so because conventional Wall Street analysts would have sugarcoated the news... that is, if they had even seen it coming in the first place. Most, as you know, did not... which is why the financial carnage that followed was so very painful for many.

In my capacity as chief investment strategist, though, I had no choice but to tell investors three things, even if they were unexpected and uncomfortable: 1) exactly what my analysis showed, 2) why it was happening, and most importantly, 3) how to profit from a market collapse that I believed was going to catch millions of unsuspecting investors by surprise.

You see, my success is derived directly from your success, not Wall Street's special interests or corporate sponsors. That's why I take the trust you place in me and in my team very, very seriously and why, today, we are the No. 1 independent financial research firm in the world.

But, getting back to the point, you know how the story ends just as well as I do.

Investors who went to the sidelines - as I advocated - made "bank" by harvesting profits. More aggressive readers did even better by purchasing inverse funds like the Rydex Inverse S&P 500 Strategy - Investor Class (RYURX) and put options.

Those who didn't and who struggled to "buy the dips" may as well have been rearranging the deck chairs on the Titanic because their portfolios still got decimated.

Could I have been wrong?

I am NOT telling you this today to make myself look smart, nor to create the opinion that I am the greatest financial analyst since sliced bread. I am not - I put my shoes on one foot at a time, every day, just like you do.

The advantage I have is one drawn from 35 years of experience in global markets as a consultant, analyst, and trader and tens of thousands of hours studying the worldwide financial markets.

I could care less about being "right" (which is how most amateurs approach the markets). What I do care deeply about, though, is helping you find the world's best investment opportunities and showing you how to profit handsomely in all kinds of market conditions (which is how legendary investors like Warren Buffett and Jim Rogers do things).

I'm telling you all this for a reason.

I recently updated that same chart I showed my audience more than a decade ago and, once again, I see a potentially very nasty turn of events ahead.

The compression that was present back in 2007 has reared its ugly head again. Technically speaking, prices have fallen off since January and are now trading just above a critical line of "last resort," which I've highlighted in yellow.

At the same time, emotions are running high, which confirms a change in sentiment I noted during an appearance on "Varney & Co." this past Monday morning, where I made the same point in response to anchor Stuart Varney's question about the possibility of a correction. 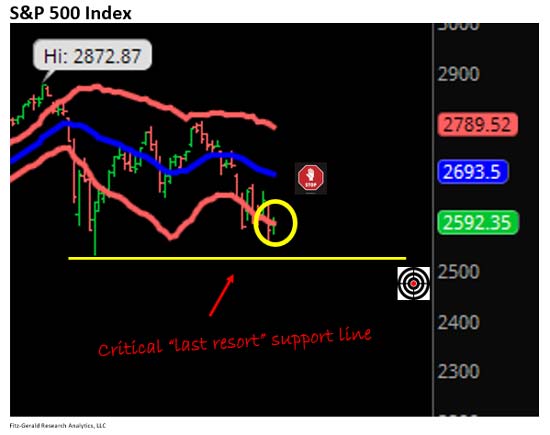 From there, chances are good it'll be another white-knuckle ride... a "Great Reckoning," if you will.

If you're like me, you've felt a sense of market turmoil ahead. This chart should be all the proof you need to take action. The last time it looked like this it was just months before the epic 2008 crash that pushed our financial system to the brink.

Ask yourself, right now, in light of what I've just laid out: Are you where you want to be financially?

If the answer is no, then you are NOT alone, and you need to click here.

As always, a little perspective is in order.

Millions of investors fear information like that which I've just shared with you because they have no idea what to make of it nor how to handle the fact that what I'm telling you is just around the proverbial bend.

Thankfully, you're not in that crowd.

As a member of the Total Wealth family, you've got a number of significant advantages - not the least of which is a very different perspective from traditional investors who risk having their 401(k)s turned into 201(k)s for the third time in less than 20 years.

As we have discussed many times, the right perspective is also the most profitable perspective. Here's what that means...

Do you think Marijuana stocks will follow the decline?

I'm living in Ireland where my investment-sensitive training business has fallen off a cliff this year. The last time this happened was 2008 when I was running a very independent small architects practice.

This time the fall is even worse. It's scary.

thanks for the info

You mean "I could NOT care less about being right ..". To say "I could care less" has the opposite meaning to what you are trying to say.