If you live in San Francisco, Baltimore, or Austin, you've already seen them popping up all over town.

Shareable scooters are popping up all over major American cities as this new transportation sector disrupts everything from buses to Uber. But it might be an even bigger deal for investors...

The global electric scooter industry will be worth $22 billion by 2024, and that has investors salivating over the prospects of getting in early on scooter startups like Bird and Lime.

While these companies are still private, we've uncovered a "backdoor" investment play in the booming market: Alphabet Inc. (Nasdaq: GOOGL). 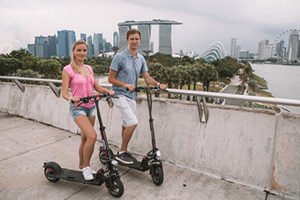 Google's parent company is always looking for the next big thing, with investments in everything from companies trying to "cure death," to drone delivery services.

Now, I know what you're thinking...

But investments in startups like Lime means the Alphabet stock price is actually on sale compared to where it could be trading in the next few years.

Why Electric Scooters Will Send the GOOGL Stock Price Higher

If it seems like electric scooters came out of nowhere, it's because they did. Bird and Lime were both founded in 2017.

But each company is now valued at $1 billion.

Users can rent the scooters through an app, and they can leave the scooters at their destinations for the next user to find. During the night, individuals are paid to pick up the scooters and leave them in highly trafficked areas for the morning.

And early-stage investments like this can send the GOOGL stock price higher.

And this isn't just a far-fetched plan to build a super city...

"Google will be gaining insights about urban life - including energy use, transit effectiveness, climate mitigation strategies, and social service delivery patterns - that it will then be able to resell to cities around the world," Wired.com said in a January report.

"Alphabet is well on its way to yielding quadruple-digit profits - the kind of investment you can use to put a down payment on a sailboat or the European vacation you've always wanted to take," Money Morning Defense and Tech Specialist Michael Robinson said in 2017.

Investing in GOOGL is a great long-term play, but it isn't the only way to make enough money to live the life of your dreams.

We also wanted to share how to access all the details about how millions of Americans are now entitled to collect "Federal Rent Checks."