That handed investors a triple-digit return on their money.

Then, I returned with another big win with Nevada Gold & Casinos Inc. (NYSE: UWN). 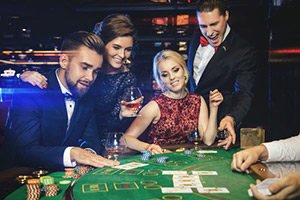 Since the Supreme Court struck down the 1992 U.S. sports gambling ban, my email inbox has been blowing up.

"What is the top casino stock to buy right now?" most subject lines blare.

After all, legalized sports betting in the United States is one of the decade's best moneymaking opportunities.

But another huge gambling development has gone ignored across the Pacific Ocean.

In June, the world's third-largest economy legalized casino gambling for the first time.

The decision reverses 111 years of precedent. It gives global casino operators a first crack at bolstering the nation's tourism and tax revenue.

And it could make you a fortune.

But before I unveil the top casino stock to own, let me tell you a story...

Am I the Lucky Rabbit's Foot?

When I was nine years old, my parents took me to Japan.

Well, let's put it this way: Mom and Dad went on vacation...

My siblings were both in college, and no babysitter was available.

So, I was brought along to walk through more temples than I could count and drink strange fiber beverages sold in vending machines on the side of the road.

Those are the two of the three things I recall most from that trip.

The third memory was even more unexpected and confounding.

Tokyo is an electric sea of lights with busy people packed atop one another.

The capital's residents had surely interacted with plenty of Americans.

Even ones with bright blonde hair and sky-blue eyes.

But far out in the country - far from the lights of Osaka or bullet train stations, I had my first experience of being a traveler in a strange country.

Once word leaked about my family's visit in several small towns and villages, curious residents - long before the internet - came out of their houses.

They followed me and entered any temple I entered.

They approached and started rubbing my head - I assume for good luck.

My parents found it funny. I was just trying to figure out what everyone was saying...

Many had never seen blonde hair like this in their lives.

At least I hope it was for good luck, because 28 years later, Japan has legalized casino gambling.

They might finally have their chance to test out whether or not I can bring them good fortune.

But you won't need a good luck charm to cash in on Japan's gambling legalization thanks to my research...

How to Find the Best Casino Stock to Buy in Japan

In June, Japanese lawmakers approved a bill that will allow casino operators to build resorts around the country.

This agency will oversee the licensing control of gaming establishments across the country.

The effort will begin with three integrated resorts in different locations.

At the moment, the Prefecture of Osaka is likely going to be the first location to authorize a casino. That has fueled an incredible courtship by casino operators around the globe as they try to get permission to launch a casino in a region with roughly 37 million people.

Now, keep in mind that this decision would reverse a major prevision in the Penal Code of Japan, which was passed all the way back in 1907.

Given the nation's conservative approach to gambling, there will be a series of restrictions aimed at curbing and discouraging gambling addiction.

For example, Japanese locals can only visit casinos three times per week or 10 times per month.

There will also be an entrance fee for visitors, and locations must be "family friendly."

Nonetheless, these resorts aren't just important because they provide an entry into the Japanese casino market, which will instantly become the second-largest Asian market after Macau, China.

I fully expect that Japan's liberalization of casino gambling will put pressure on other places around the Asian Pacific Rim to expand existing and new casino operations as a way to promote tourism, including Singapore, Macau, and potentially South Korea.

And that is going to be very good news for this casino stock...

The Top Casino Stock You Need in Your Portfolio