Marijuana was legalized across Canada for adults on Oct. 17, and this is a major reason to take a closer look at the two biggest cannabis stocks to watch in November 2018.

On Nov. 6, eight more U.S. states voted on marijuana-related ballot measures, and more states are ready to legalize it soon.

The New Jersey legislature could take action to make cannabis legal, making it the second largest state to legalize after California. As marijuana legalization sweeps North America, it makes sense for anyone who hasn't done so yet to learn how to invest in cannabis stocks. 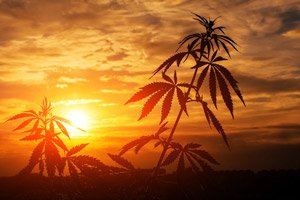 In just another three short years, the legal cannabis market could explode into a booming industry that is worth an astounding $24.5 billion in the U.S. alone. This is more than twice the market's current value.

When marijuana becomes legal, more people will buy the products - but there's more to it. Supporting industries such as suppliers, cultivators, distributors, and marketers will also see their business soar.

Likewise, the companies that are experimenting with ways to tap into the medicinal benefits of cannabis will increase their efforts.

This is all good news for investors of marijuana stocks, particularly those who get in early.

Since increased legalization is going to be a catalyst for major gains, you can cash in with these two top cannabis stocks to watch right now.

Cannabis Stocks to Watch in November 2018, No. 2: GW Pharmaceuticals

GW Pharmaceuticals Plc. (NASDAQ: GWPH) is a unique pot stock and certainly one worth putting on your watch list.

This UK-based biopharmaceutical company has been in business for two decades. It develops and markets cannabis-based drugs that target specific conditions.

Its primary achievement to date is through a drug called Epidiolex. This is a medicine focused on treating two rare forms of epilepsy. There is also the possibility of expanding the drug's use for other conditions.

The company's developers used cannabidiol to produce Epidiolex. Also called CBD, this is a non-psychoactive derivative of cannabis. Marijuana in its pure form contains THC, which is the compound that produces a euphoric feeling.

CBD doesn't have euphoria-inducing properties. It is instead becoming popular because it has many other uses. It is known for helping with pain, spasms, anxiety, inflammation, and other bothersome conditions.

And the drug is now proven to be effective.

The U.S. Food and Drug Administration (FDA) announced in June 2018 that it had approved Epidiolex to treat patients who have Dravet Syndrome and Lennox-Gastaut Syndrome. This is the first cannabis-derived medicine that has ever received FDA approval.

The FDA followed this up with even better news in September when it announced that Epidiolex would be placed in Schedule 5 of the Controlled Substances Act. This is the least restrictive rating that a drug can receive, where ratings are based on a combination of proven medical benefit and a drug's potential for abuse.

Finally, the drug became available for physicians to prescribe to patients in October. There is now help for patients who suffer from severe and frequent seizures that were previously resistant to medical intervention.

GWPH stock jumped 8% in June when the FDA's announcement came out, and it went up another 7% in September to reach an all-time high of $179.65.

Money Morning Defense and Tech Specialist Michael A. Robinson predicts that Epidiolex alone could generate as much as $1.7 billion in revenue by 2026.

The GWPH stock price is trading for $129.96, and analysts surveyed by Yahoo! Finance project it could climb to $179.09 per share.

But there is an even bigger profit play in the marijuana market with our next stock to watch.