Thanks to concerns about weakening iPhone sales, the Apple stock price shed as much as 39% of its value between early October and the first days of January.

And while shares of Apple Inc. (NASDAQ: AAPL) have recovered a bit since (up 20% from about $142 to about $171), the concerns over the company's iPhone business hang over the stock like the grim reaper. 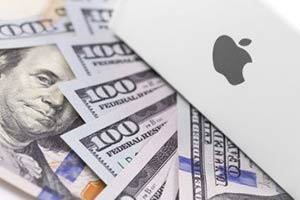 But unlike other companies that clung too long to a lucrative but stagnating business model - the Steve Ballmer-era Microsoft Corp. (NASDAQ: MSFT) comes to mind - Apple is already pursuing alternative sources of growth.

And let's be clear: Apple's iPhone business isn't going to dry up and blow away anytime soon. But with the smartphone market nearing saturation, especially the mid- to high-end that Apple targets, the days of monster growth from the iPhone are over.

One strategy Apple has adopted is milking more revenue from its installed base through services such as Apple Music, AppleCare, the App Store, and iCloud. Services revenue has doubled from $18 billion in 2014 to $37 billion in 2018. It's expected to double again by 2022 to $80.6 billion.

That helps, but according to FactSet, data analysts foresee annual iPhone revenue declining by $26 billion between 2018 and 2020. The company will need another major source of earnings growth to move AAPL stock back to its all-time high of $233.47 and beyond.

And it has one in healthcare...

Meet the Apple Stock Price Catalyst for the Next Decade

Apple CEO Tim Cook, in a Jan. 8 interview with CNBC personality Jim Cramer, made an astonishing statement that has gone virtually unnoticed.

"I believe, if you zoom out into the future, and you look back, and you ask the question, 'What was Apple's greatest contribution to mankind?' it will be about health," Cook told Cramer.

Stop and think about that for a second...

This is the man who runs the company that helped launch the PC revolution with the Apple II, introduced the mouse-based graphic interface with the Macintosh, and essentially invented the smartphone with the iPhone.

So if Cook says Apple's contribution to healthcare will be bigger than any of those monumental contributions... you know Apple is taking healthcare very, very seriously.

"Tim Cook isn't particularly stressed about the iPhone," Money Morning Chief Investment Strategist Keith Fitz-Gerald said. "He knows there's a far more profitable pivot for Apple that's coming down the pipeline - and that's into health and the medical world. We're talking wearable technology, medical devices, health services... all of which are very high-profit, high-yield areas and each of which has huge future growth potential."

YOU KNOW IT IN YOUR GUT: Look at how things are going. Financial turmoil is coming just around the corner, maybe just a few months away. Click here...

In fact, Apple's website actually has a whole section devoted to healthcare (although you do have to hunt for it).

And it's a smart move.

Healthcare is one of the few areas with enough revenue potential to move the needle for Apple. In the United States, healthcare is a $3.7 trillion market. Globally, $7 trillion is spent on healthcare annually. Both figures are bound to keep growing.

Just 1% of this spend would give Apple $70 billion of fresh revenue. It's a vast opportunity that will render concerns over the iPhone irrelevant.

"People who don't have a piece of Apple will miss one of the greatest gravy trains in finance," said Fitz-Gerald, who was one of the first to talk about the potential of a healthcare pivot for Apple. As this plays out, he thinks healthcare could create as much as $1 trillion worth of wealth for Apple - sending AAPL stock surging past its all-time high.

And the transition has already started.

The first salvo was the Apple Watch. Many misjudged it as a mere status symbol product that miniaturized iPhone functionality to your wrist.

But from the beginning, Apple intended it to be a health monitoring device. That's why the first version in 2015 had sensors to monitor your activity and heart rate. The latest Apple Watch, the Series 4, added a new sensor that can take electrocardiograms.

Paired with software on both the Watch and an iPhone, the device has evolved into a very capable personal health monitoring device.

So capable that several major health insurers have noticed...

An Apple Watch on Every Wrist

Just this past week, Aetna Inc. and Apple announced a partnership on an iPhone and Watch app called "Attain." In addition to helping people monitor their health, the app has an option to "earn" a free Apple Watch by meeting monthly fitness goals.

Last fall, Apple and UnitedHealth Group Inc. (NYSE: UNH) announced the addition of the Apple Watch to UnitedHealth's Motion program. Similar to the Aetna program, it offers an option to earn an Apple Watch by meeting daily walking goals.

John Hancock announced in September that it would add its "behavior change platform," Vitality, to all of its policies in 2019. This program also allows people to buy an Apple Watch for just $25 by staying fit over a two-year period.

And CNBC reported in January that Apple is in discussions with at least three private Medicare plans about subsidizing the Apple Watch for folks over 65 who otherwise couldn't afford it.

By adopting the Apple Watch as the device of choice, these insurers are giving Apple a major beachhead in the healthcare industry. And best of all - they're subsidizing it.

Of course, the insurers get a benefit, too - healthier customers will use less healthcare services, saving the insurers money - but this will translate to millions of additional Watch sales for Apple.

And it will only be the beginning.

"The game changes when your doctor prescribes an Apple device and your insurance company has to pay for it," noted Fitz-Gerald.

We may already be seeing the impact. In its December quarter earnings report last week, Cook said revenue from wearables, which includes the Apple Watch, was up 50% from the same quarter a year ago.

Indeed, the Apple Watch may just be the first of a whole new class of Apple health devices.

The company recently filed a patent that would add biometric sensors to its popular AirPod wireless earbuds. Such sensors could monitor heart rates and body temperature and even know which ear it was in.

And don't forget the iPhone. The iPhone links to the Watch and makes it easier to interact with the healthcare data. Yes, this healthcare pivot will help prop up iPhone sales, too.

And it's a key element in a second Apple healthcare strategy...

A "Gliimpse" into Apple's Future