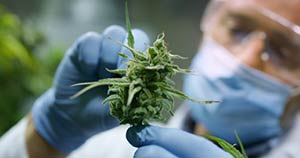 Investing in the top marijuana penny stocks on the market can be an exciting way to grow your portfolio. They give investors an affordable entry point into one of the hottest markets in the United States.

In fact, the top marijuana penny stocks to watch in February 2019 can bring gains as high as 300%.

Local and federal governments have been legalizing cannabis more and more over the past year. That's only going to increase the size of markets and the amount of demand.

Let's look at all the milestones. In mid-October 2018, Canada legalized pot all across the country.

In late October, the incoming Mexican government said it would take steps to legalize cannabis.

But as we've told you before, penny stocks as a group can be risky and volatile, subject to high price swings to the upside and downside.

Our top marijuana penny stocks to watch in February 2019 are expected to skyrocket as the trend toward legalization continues in 2019. However, we always caution readers to never invest more than 2% of your investing capital in penny stocks.

These stocks are all innovators in the cannabis industry and are creating cutting-edge ways of achieving profits - both for their shareholders and themselves.

Here are the top marijuana penny stocks to watch now...

Top Marijuana Penny Stocks to Watch in February 2019, No. 3:

Our No. 3 stock to watch is Easton Pharmaceuticals Inc. (OTCMKTS: EAPH). EAPH is the maker of Nauseasol, a gel that treats motion sickness. It also makes Skin Renou HA, a cream that combats aging skin.

Benzinga indicated in 2017 that EAPH was close to putting together a cannabis business deal with the Canadian company Alliance Group. The deal is expected to be worth $1.3 million.

Easton has contributed $575,000 to the deal already. Once it is completed, EAPH will have 45 acres for cannabis cultivation and production under its control.

Until the property produces a yield that is marketable, Easton will get half of Alliance's revenue.

EAPH can either sell the cannabis from the deal to pharmaceutical companies or use it for its own products.

The rising demand for cannabis spurred by increased legalization will impact EAPH's bottom line positively in the future.

Top Marijuana Penny Stocks to Watch in February 2019, No. 2:

Currently, it grows tobacco with 97% less content in nicotine than natural products have. Its use is for smokers trying to reduce or quit nicotine.

The products have provided XXII a means to join a growing market, one that was responsible for revenue of $2.9 billion in 2018.

The same technology can also be used in the legal weed market. Currently, the company is utilizing its tech to assist hemp farmers in meeting U.S. requirements for the content of THC in their products. The United States mandates that hemp crops containing THC levels greater than 0.3% have to be dumped.

By 2025, the hemp market worldwide is forecast to be worth $10.6 billion, according to Grand View Research Inc.

Currently, XXII trades for $2.50 per share. But Chardan, an investment bank, sets its 12-month target price at $11.50. If it hits that forecast, investors could realize profits of 360%.

A whopping return, you say? Our next cannabis penny stock to watch is expected to skyrocket even more on its innovations.

Top Marijuana Penny Stocks to Watch in February 2019, No. 1:

I would like to invest in cannabis penny stocks.
I am in South Africa.