By now, it should be clear that cannabis investing is one of the great wealth-building opportunities of the early 21st century.

According to the National Institute for Cannabis Investors (NICI), the legal marijuana market is set to explode from $55 billion today to $146 billion by 2025. 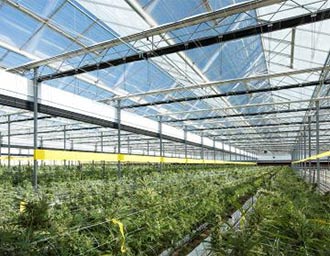 Some of the best marijuana stocks have racked up impressive gains. Aurora Cannabis Inc. (NYSE: ACB) is up more than 450% since listing on the Toronto Stock Exchange in July 2017. (It debuted on the New York Stock Exchange in October of last year.)

And Canopy Growth Corp. (NYSE: CGC) is up more than 1,000% since its debut on the Toronto Stock Exchange in 2014 with the ticker WEED. (It started trading on the NYSE in May of last year.)

But the best-known pot stocks tend to be overbought. These companies are typically those growing and producing marijuana, those making and selling high-visibility marijuana-based products (like edibles), or biotechs working on medical uses of cannabis.

I'm talking about real estate–related marijuana stocks. These companies own or lease properties to licensed cannabis-growing operators. It's an opportunity that has emerged from the legal complications associated with acquiring and managing real estate used for marijuana operations. Real estate specialists provide expertise in navigating this often-treacherous legal territory.

Most of these firms are micro caps or nano caps – relatively small even in the world of cannabis stocks. But while that translates to higher risk, it also means you're looking at an opportunity for big gains.

We've identified the four best marijuana stocks with a focus on real estate – the four most likely to bring gains to your portfolio.

MJ Holdings is a cannabis-based holding company that operates primarily in Nevada, where it is headquartered. It provides real estate services and management services to the cannabis industry. It also has its own brand of cannabis products, Highland Brothers.

The 16-month-old company has been on a land acquisition spree and expects to grow three times as much cannabis by 2020. MJ Holdings has a proprietary mesh system for growing the plants that it says cuts expenses by 50% to 70%. This gives it a powerful competitive advantage over rivals offering similar services. The company also has plans to expand into Europe.

MJ Holdings has established itself rapidly and has a strong strategy for capitalizing on the coming growth in the cannabis sector. This stock could easily double or triple over the next year or two.

This company, also based in Nevada, was founded in 2014 as Grow Condos Inc. It provides turn-key real estate solutions to client cannabis growers. Last year, when the company changed its name to Grow Capital, it announced a shift in strategy that expands its business model to include technology and financial services to the cannabis industry. Grow Capital's ability to meet multiple needs of its cannabis-grower clients will help those clients thrive – and in turn keep Grow Capital's business healthy as well.

Last month, Grow Capital said it was also looking to make acquisitions of fintech companies it intends to mentor. Like MJ Holdings, GRWC is a stock that could see a rapid rise in price if can successfully tap into the growth of the marijuana industry.

Two Rivers, as the name suggests, is heavily involved in water management and water rights in addition to its interest in developing and leasing greenhouses to cannabis growers. In February, Two Rivers bought three hemp-focused businesses as it pursued a strategy to vertically integrate within that space "from seed to products."

While the company has high hopes for its cannabis-related business, the water rights business also has tremendous potential. Two Rivers controls significant water rights in an area in south central Colorado where water is a scarce and precious commodity. The company owns the Cucharas Reservoir there and has plans to expand it and market it to both agricultural and municipal customers.

Given that TURV has interests in two high-growth industries – water and cannabis – this stock has a great chance to triple or more over the next couple of years.

But the real estate–related marijuana stock we like best is the least risky of all. It trades on the New York Stock Exchange and offers a 2.25% dividend yield on top of its stock gains. It also happens to be a top pick of the National Institute for Cannabis Investors…

Watch Your Wealth Grow with This Real Estate Cannabis Stock