Stocks are down over 6% in just a month as the trade war with China escalates. In fact, the Nasdaq has officially entered correction territory.

That has investors on edge about the possibility the next stock market crash could be coming soon. 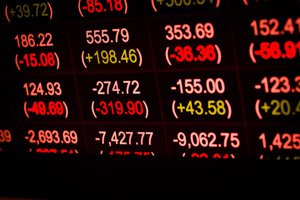 And the upcoming presidential election could be the final push that sends the markets tumbling.

Reigning in share buyback programs is almost certain to become a rallying cry of the Democrats should they wrestle back control of the White House and both houses of Congress in 2020.

While these programs have their dangers, they are also the reason that the current bull market has lasted as long as it has. Banning them will also dry up the demand for stocks, which is a virtual guarantee of a new bear market.

Restrictions like this are becoming more likely since several Democratic presidential candidates have indicated a desire to restrict some of the excesses on Wall Street. Among these are Sen. Bernie Sanders (I-VT), Sen. Elizabeth Warren (D-MA), and even former Vice President Joe Biden.

Here's why they are under fire now…

In February of this year, Sanders co-authored an op-ed piece in The New York Times with Sen. Chuck Schumer (D-NY) in which the two referred to stock buybacks as "corporate self-indulgence."

Warren has also made her distaste of these practices clear for many years. As far back as 2015, she said buybacks were "stock manipulation" and should be treated as such. Last year, she co-sponsored a bill that would severely limit them.

In March of this year, Sanders, Warren, and Sen. Kirsten Gillibrand (D-NY) co-sponsored a bill that would ban share buybacks altogether.

There is even some bipartisan support for these moves. Sen. Marco Rubio (R-FL) indicated this February that any preferential tax treatment for share buybacks should end, which would limit their use and discourage the practice.

Unfortunately, curbing buybacks is going to hurt the stock market, due to its hopeless addiction to these moves.

What many investors don't realize is the vital role that stock buyback programs have had in the bull market that began in 2009.

Since 2009, this report reveals that corporations – which finance stock buybacks – account for over 90% of the net purchase of stocks.

An incredible 120% of the net demand for stocks since 2014 can be traced to share buybacks. In short, there would have been net selling over this period if not for these programs, meaning we'd be solidly in a bear market or recovering from a potential market crash.

Since 2009 alone, close to $5 trillion has been spent on share buyback programs, which have artificially inflated the broader market and individual stocks. And without them, stocks would be valued at much lower levels.

Over the past several years, the dependency on share buyback programs has only intensified. In 2012, $400 billion was spent on share buybacks, and this figure jumped to $806 billion in 2018.

If this is stopped or even curtailed, it's going to be tough on the market. But even if these are allowed to continue, there is another threat on the horizon.

Share Buybacks Are in Jeopardy from This Major Catalyst

Share buybacks haven't been happening by accident. Companies have been using the cheap costs of borrowing to finance their buyback programs.

Unfortunately, many companies have taken on serious debt to repurchase their own shares, lured in by the Fed's near-zero interest rates.

Bank of America Corp. (NYSE: BAC) released a report in April revealing that U.S. companies have borrowed $2.5 trillion over the past five years and spent $2.7 trillion buying back their own shares.

Roughly a quarter of share buybacks were done with borrowed funds between 2011 and 2015. This went up to one-third from 2016 to 2017. When interest rates went up, that figure plummeted to 14% last year.

Unfortunately, this type of debt still sits on many companies' balance sheets, which impacts investors. And it could make the next stock market crash coming even worse.

Now, more investors would rather that corporations pay down debt instead of buying back stock. This puts companies in a position of having to defend their balance sheets.

Whether interest rates rise, making share buybacks less attractive, or it just becomes outlawed, a stock market crash could be a by-product.

Fortunately, you don't need to be a victim…

What You Can Do to Prepare for a Market Crash