Though we usually prefer to look beyond popular trends like this, there's actually solid evidence a stock market crisis could be coming soon. But not to worry - we have a three ways to stay profitable in that event, and we're going to share them with you.

We're not expecting a major plummet in the market averages like in 2008. But it's just always been fundamentally true of the market that it does not rise endlessly. It always fluctuates between periods of ups and downs. 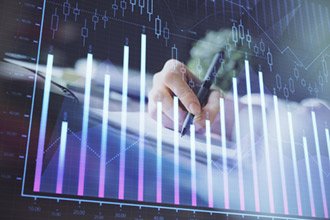 That means it's likely we'll see a bear market, which is defined as a drop of 20% or more, at some point in the future.

What investors need to do is be prepared for the natural fluctuations in the market. It's possible to hedge against downside, to minimize the impact when a market correction takes place.

The economy is not in the same as it was in 2008; there are more safeguards. However, signals are indicating that investors should begin to think defensively, maybe not about a stock market crash, but at least a pullback or correction.

Money Morning has noticed some very early signals of potential problems, short-term, for the stock market.

We see a brief change of direction, though we still think the market could go up long-term for the next 10 years.

We'll show you how you can reduce your exposure to risk and shore up areas that can optimize your returns. But first, here's a big stock market crash warning that's being overlooked...

The primary sign is a change in cyclical stock performance. Cyclical stocks are extremely sensitive to economic health, and their performance hasn't matched that of the major indexes since May.

That kind of lagging performance often indicates a speed bump may be on the way - maybe even before year end.

Recently, analysts at JPMorgan Chase & Co. (NYSE: JPM) observed a similar lag in performance, this time with the S&P 500 consumer discretionary sector in the last 12 months. They compared it with the consumer staples sector of the S&P 500, and the differences provided some insight.

Consumer discretionary stocks performed half as well as the consumer staples during the period. The former typically leads when markets are strong - not the case here. Staples customarily lead when markets are weak. In other words, even though the S&P 500 has hit record highs this year, the positions are off.

That sounds a warning bell for a stock market crisis.

Either people buy discretionary goods and the market moves up, or the market drops and consumers stick to staples.

Seeing staples beating discretionary goods might put some investors on edge. They may not have to be, though.

But the following three components of preparation for a market crash should provide some peace of mind.