Elon Musk's latest tech rollout is straight out of science fiction. It could also mean $100 billion growth for the cybersecurity industry.

And our best cybersecurity stock is going to ride this wave. In fact, it's grown its profits by 198% over the last three years, with no signs of slowing down.

We'll tell you more about that in a minute. 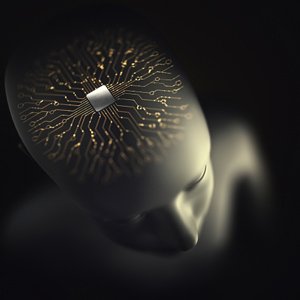 In a July 16 press conference, Musk-owned Neuralink unveiled new details on its implantable computer-brain interface – i.e., a computer chip that allows you to control computers with your mind.

The company said it's "ready for brain surgery," meaning it's ready to implant the DARPA-developed technology into human brains.

Musk said the process of doing this is "sort of equivalent to a LASIK type of thing," referring to LASIK eye surgery.

If you're not familiar with LASIK, it's meant to improve your vision using a laser to reshape the eye's cornea. It's also commonly referred to as "laser eye surgery."

Though it's incredibly complicated and requires insane precision, LASIK surgery is quick and easy on patients, no more than 10 minutes per eye.

Achieving this sort of efficiency with Neuralink could be revolutionary. And the company said it will begin clinical trials in 2020.

Neuralink has said it wants to enable paralyzed people to command phones and computers, hands-free and voice-free.

"This is going to sound pretty weird, but ultimately, we will achieve symbiosis with artificial intelligence," said Musk.

That sounds great, but what's the catch?

Believe it or not, there are cybersecurity risks to having a Bluetooth-enabled device inside your head.

It's the same reason the cybersecurity industry is growing.

It's also why our best cybersecurity stock has seen 267% growth over the last five years.

Cybersecurity Threats in the Cloud

The oncoming Internet of Things is an endless, virtual web of devices and networks. People will continue to adopt voice assistants, wearables, smart TVs, and smartphone upgrades.

They'll keep downloading apps that synchronize these devices. And the data customers transmit through those devices will accumulate in the cloud.

Plus, companies keep personal user information in the cloud, both for research and marketing purposes.

That's creating the digital version of a bank vault. Hackers are always looking for new ways to breach them – Social Security and bank numbers are just the start. With all the biometric data available today, it's far easier to steal someone's identity than it was just a few years ago.

We become increasingly vulnerable to these breaches with the more information we let pass through the cloud (see our coverage of the facial recognition aspect of cybersecurity earlier this week).

And anything connected to the IoT is susceptible to cyber threats. But Neuralink takes the threat to a whole new level.

David Starobinski, a researcher at Boston University, said known threats could include "spoofing, sniffing, tracking, and jamming of data."

Take spoofing for example. This is when you get a robo-call from a familiar looking number, only to realize it was a scam. The same applies to emails, websites, or any malicious computer program designed to masquerade as something else. The goal is to deceive users into giving up personal data or installing a virus on their computer.

Since the Neuralink app will be available in the app store, one instance of spoofing would be for someone to make a copycat version of the app for people to download and infect their devices.

Tracking can refer to any kind of monitoring of data, however continuous. A smartphone that is being tracked could give the hacker a constant feed of the data – screen, audio, camera, or in this case, brain activity.

A hacker may continuously track the Neuralink implant's communication with an iPhone. A jamming attack, on the other hand, would mean disabling that communication.

These threats become increasingly viable the more devices we have connected and the more data we're allowing to pass through those devices to the cloud.

Neuralink is one such device, because it uses Bluetooth and an app – two easily hackable interfaces – which can lead to some pretty grisly ends.

In fact, remote connectivity actually seems to be an overlapping concern among cybersecurity professionals criticizing Neuralink.

How Your Brain Could Be Hacked

Joseph Carson, Chief Security Scientist at Thycotic, said Neuralink is taking what was once intended for victims of paralysis, democratizing it and "including added common interfaces that have been more prone to being hacked."

By "common interfaces… prone to being hacked," he's referring to Bluetooth.

"If someone were to be able to take over the device, the consequences could be disastrous," Whitescope researcher Billy Rios told Verdict.

He's talking about the Neuralink implant. But his company also managed to hack and remotely disable an insulin pump, as well as seize control of the electricity levels of a pacemaker, less than a year ago.

"You can issue a shock," said QED's Jonathan Butts of the pacemaker (his team partnered with Whitescope on the project), "but you can also deny a shock."

That's exactly what it sounds like. With enough computer know-how and some very bad intentions, one person could shock another to death using their own pacemaker. Or they could deny the person a much-needed jolt.

After these vulnerabilities were discovered, Medtronics, the company behind the vulnerable pacemaker, said they would not fix it and that doctors and patients would just need to be extra careful about the networks they connect their devices to, according to The Guardian.

Now, if Neuralink and its users aren't "extra careful," Verdict writes that hacking could result in loss of memory – hackers might even inflict pain or paralysis, finding different ways to harness the Neuralink implant.

The University of Cambridge's Alastair Beresford also pointed out that it's possible for the technology to "write new data into the brain."

He said, "if the idea is more than simply reading from the brain, then this is likely to be a big risk."

Hope for the Cybersecurity Industry

The question isn't whether or not Neuralink is dangerous, it's whether cybersecurity tools can keep up with rapid advances in technology.

Awareness is growing about the privacy of consumer information. That means companies handling large amounts of important data, in the interest of keeping customers, would be just as interested in being good stewards of that information.

Equifax is still paying out its $425 million settlement with up to 147 million people affected by their big data breach in 2017. That level of damage from just one attack will push companies to spend even more money trying to prevent them.

And that's even more true of breakthrough technologies like Neuralink. If they can't ensure their product is completely safe from hackers, then it won't matter how great it is.

"Corporate America should get ready," said Robert Herjavec, Angel Investor and CEO of Herjavec Group. "Cybersecurity regulations will soon be coming to the United States – and that's actually a good thing."

Futuristic tools like Neuralink simply mean even more money will be spent on the cybersecurity industry to protect data.

It will specifically give one of our top cybersecurity stocks a boost. We know this because our stock registers a perfect 4.45 on our proprietary Money Morning Stock VQScore™ system.

The system scores stocks based on their chance of breaking out higher. It boils down earnings growth and other factors into a single number to value the stock's overall earnings power.

And this stock is riding the tailwinds of a cybersecurity boom.

And even after increasing profits by 198% in three years, this stock has a VQScore right in the "Buy Zone."

That means it has extreme upside right now…

The Top Cybersecurity Stock to Buy