It's hard to beat the excitement that comes from angel investing.

You might have heard about big-name angel investors like Jeff Clavier, the founder of Uncork Capital. He's made successful early-stage investments in Fitbit Inc. (NYSE: FIT), Eventbrite Inc. (NYSE: EB), and Mint.com, among others.

His golden touch has made him a regular on the Forbes Midas List of top tech dealmakers. It’s not surprising that Amazon.com Inc. (NASDAQ: AMZN) CEO Jeff Bezos himself benefited from 22 "angels" who supported Amazon when it was a fledgling online bookseller in the mid-1990s. 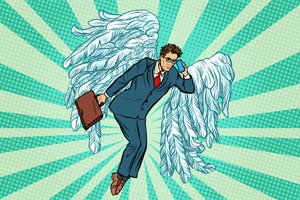 Many of Amazon’s initial investments came from Bezos’ family and friends. $50,000 secured 1% of the company.

Today, those shares are now worth more than $8.5 billion. That investment saw a 17-million-percent gain 25 years later! But how do angel investors work, and do you really need thousands of dollars to become an angel investor?

We’ll show you how, even with $50, you too can dive into the exciting and profitable world of angel investing.

Today, angel investors provide seed capital to startups before they've gone public. In return, the angel investor is typically given a stake in that company. Some angel investment agreements involve buying preferred stock (which comes with greater privileges than the common stock you'd typically buy on a stock exchange). Other angel investing deals include convertible debt or bonds that the investor can choose to convert into common stock down the road.

How Do Angel Investors Work Compared to Venture Capitalists?

Both angel investors and venture capitalists invest in startup businesses and entrepreneurs. However, there are key differences between these two types of investors.

Angels often fill the gap after a company has gotten their initial investment from family, friends, an d acquaintances, but before venture capital firms enter the timeline. By this time, the business plan has been tested and is generating revenue, but the enterprise has not reached a large scale. For example, an angel may step in when the business has a value of less than $5 million.

Venture capitalists are usually part of a firm with multiple decision-makers involved. They usually continue having an active role in the business. Angel investors can choose to maintain an advisory role. However, since they are an early backer and may have an equity stake, angels often continue to interact with the business and can offer input on some business decisions.

How Do Angel Investors Work Compared to Shareholders?

Buying shares of a public company will only get you a handful of votes out of millions. Being an early backer in a business is a lot more involved and gives you more access to the company. However, that access comes at a cost. For instance, you might not have a lot of say as a shareholder in Johnson & Johnson (NYSE: JNJ). However, there's minimal risk of the company going belly-up tomorrow.

The companies you come across as an angel investor are going to have a much different risk-reward profile than Johnson & Johnson. As a result, when you become an angel investor, you'll need to use an entirely different approach than you would use for traditional stock investing.

Rethinking the Math as an Angel Investor

Angel investing requires more risks than traditional investing, but the rewards are astronomically higher. Therefore, it should take up a relatively small portion of your portfolio. We recommend the 50-40-10 model, which allocates 10% of your portfolio to speculative investments.

With angel investing, the math is different. Instead of aiming for every investment to return 10% or 20% year after year, angel investors only need one or two of their investments to return 1,000% (or more) to make it worth it. In other words, it's best to invest small amounts of money – as little as $50 each – in a wide range of startups rather than large amounts into just a few.

This is a difficult mindset for traditional investors to adopt. You can invest in 20 companies, watch 19 of them fail, and still be incredibly successful. After all, that one winner could be the next Amazon that turns your $50 into millions. When you become an angel investor and begin investigating private companies, you’ll need to consider stock dilution and exit points.

How Do Angel Investors Work When a Stock Is Diluted?

If you've seen the movie "The Social Network" about the founding of Facebook Inc. (NASDAQ: FB), you probably remember the scene in which the company's co-founder Eduardo Saverin finds out that his shares have been "diluted."

A $500,000 investment from billionaire Peter Thiel (an angel investor) had raised the value of the young startup significantly. But Saverin's shares didn't increase in value. His ownership stake in Facebook had instantly dropped from 34% to just 0.03%, with Thiel and the other stakeholders now owning the rest. The real story is a bit more complicated than that. But dilution is a real thing in the angel investing world. Say an investor puts $250,000 into a $500,000 company. In many cases, the result will be that this investor now owns one-third of a $750,000 company. The company is now more valuable. Unfortunately, the existing shareholders didn't see the value of their investments rise, but instead, found that their ownership percentage has decreased.

This may sound terrible at first, but you can use dilution to your advantage. Dilution doesn’t necessarily reduce the dollar value of your shares, only the ownership percentage. It's better to own 1% of a company ready to break out than 2% of a company ready to collapse. Furthermore, surges of capital like this are often a strong indication that you've picked a winner.

The key is knowing your rights regarding dilution. Pay attention to all the technical details laid out in the investment agreement. If your shares can only be diluted by the same percentage as the company's founders and everybody else, you probably don't need to worry. However, you should stay away from agreements that allow other shareholders to maintain their ownership percentage while diluting your shares.

How Do Angel Investors Work to Set Proper Exit Points?

The early $50,000 investments in Amazon could now be worth $8.5 billion. Unfortunately, any rise in the value of your shares is unrealized gain – you haven’t actually made any money - until you sell those shares. Angel investors need to realize or bank at least some of their gains. This means that you need an exit point, or a liquidity event, where you can trade your shares in the company for cash after you've made a sizeable return.

In a lot of cases, that exit point will be the IPO or a company’s initial public offering. As an investor, you’ve likely heard that IPOs are rigged against you. Investors tend to pay a premium for a good but overvalued company during the IPO. As an angel investor, though, you are one of the beneficiaries of the IPO system. Use the offering as a chance to bank your gains. If you really believe in the company's long-term potential, you might decide to sell half your shares and hold onto the other half to keep enjoying the company's rise. Alternatively, you can sell at the IPO and then buy common shares on the market later when the price is favorable.

Another possible exit point is acquisition. If you pay attention to financial news, you'll see stories of big conglomerates buying up startup companies for billions of dollars. This buyout is a potential big payday for you. When you're choosing which startups to invest in, aim for companies that are likely to have an exit point within the next five years. This time frame guarantees that you won’t be waiting too long to bank your potential gains. And once you've become an angel investor for a few years, you should have exit points occurring on a regular basis, freeing up more funds for a new investment. With the basics of angel investing out of the way, here’s the most crucial question: How do angel investors work to create huge gains with small investments? Pick the right companies to invest in.

Take the Plunge and Become an Angel Investor

It is absolutely critical to pick the right startups to invest in. Remember, angel investors don’t have to hit a home run every time. If even one company out of 10, or maybe even one out of 20, really takes off, that could easily be enough to make it fantastically profitable. But there's a world of difference between getting one out of 20 and getting zero out of 20. It's the difference between a successful angel investor and a complete failure.

So, picking a portfolio to ensure that you get that one startup – or two, or three – that takes off can mean the difference between a successful angel investor and a complete failure. So how do angel investors work to decide which companies are viable? If you've never invested in early-stage companies before, the prospect of finding the right ones might seem hopelessly daunting. Thankfully, you don't have to do it alone.

We've got two of the world's most successful angel investors to get you on your way to investing in winning startups and collecting the huge profits that come with it. As long as you've got $50, you can join the exciting, exclusive world of angel investing right now.

Theres so many levels, that regular people can be apart. Something big. No matter who you are someone has always gotton things from others. ( it takes a village to raise a child.

Looking into this for sure.