Predicting what the Federal Reserve will do at any of its regular meetings has turned into a cottage industry. But honestly, no one can predict the Fed's next move.

That hasn't stopped Money Morning Quantitative Specialist Chris Johnson from devising a strategy to profit from the Fed's mixed signals.

The central bank's latest move came Wednesday, with an interest rate cut of 25 basis points. And even with President Trump breathing down their necks, the tone is hesitant with regards to future cuts. 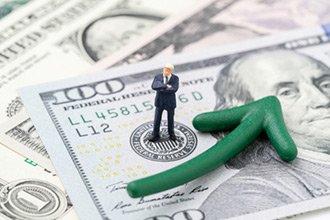 From the inverted yield curve to presidential tweets, you would think a bigger cut was on the way. But with the economy firing on all burners, despite recent softness, critics are wondering why the Fed does not raise rates.

The general outlook was that the Fed would cut rates by 25 basis points then possibly repeat that one or two more times this year.

Well, we got the first part. But the language of their statement seemed to tone down the need for more cuts. In fact, little changed in their statement between July (their last rate cut) and now. Federal Reserve Chair Jerome Powell simply called it a "mid-cycle adjustment" and said the Fed will continue to be "highly data-dependent."

The market did not like that. A 200-point loss on the Dow Jones Industrial Average followed the morning's modest loss.

A half-point drop might be politically expedient. But with the yield curve no longer inverted, the urgency is gone. And though seemingly temporary, the weekend attacks on Saudi Arabian oil fields did send oil prices higher. They still remain elevated today.

On the other side of the coin, negative interest rates around the world give the Fed plenty of cover for lowering rates more than once.

You Have to See It to Believe It: Claim your stake in this 1,000x market phenomenon with just $50. Click here now…

The so-called experts and Fed-watchers were really not so sure what would happen. Even the market itself seems confused as the initial post-Fed sell-off reversed itself to the upside.

But investors don't need to be this lost. They can protect themselves, and even profit, by the next Fed meeting.

As Chris Johnson puts it, the market is "decidedly indecisive" right now.

For starters, an accommodative Fed, even with a small rate cut, is bullish for stocks. That's part of the reason they've been creeping higher.

With China trade talks still up in the air, the central bank already said it will stand at the ready to protect the economy with additional Fed rate cuts if it gets worse.

Still, that's a double-edged sword for the market. No trade deal means the Fed will be there to help out, and stocks remain firm. If there is a deal, the market will rally big-time no matter what the Fed does.

Just not yet. Chris Johnson is waiting for a few more pieces to fall into place before shifting to bullish-neutral.

One of those pieces is the CBOE volatility index (VIX). It's fallen below 15. That happened just last week. And despite its recent blip above that level, an overall lower VIX is still promising for a buyer's market.

Another piece is that small-cap stocks are moving higher. This, too, happened just a few days ago. And now, the Russell 2000 index of small-cap stocks has outperformed the S&P 500 substantially.

So why not just back up the truck and buy stocks? Recent losses in the Dow Jones show the broader market still perceives the Fed as dovish.

We should leave some time for knee-jerk sentiment to loosen its grip on smaller stocks. Then we can decide if there are any meaningful signals.

But Chris is not just sitting on the sidelines waiting for the "bull bus", as he calls it. Even as the major indexes inch their way higher, we can make good money while the Fed decides what to do.

In fact, here's what Chris recommends you do right now.

How to Profit from the Fed's Uncertainty