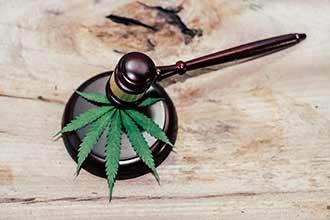 The coming year is shaping up to be a big one for cannabis investors as we move even closer to nationwide legalization. Today, we're giving you a list of the 10 states with the best chance to legalize marijuana in 2020.

Not only are these states amending their cannabis laws, but perceptions of cannabis are changing across the country. A majority of the presidential candidates favor federal cannabis legalization, and even some of the most conservative U.S. states are changing their tune.

That's why Greg Miller, Executive Director for the National Institute for Cannabis Investors, believes 2020 will be a critical year for cannabis stocks.

The legal marijuana market is currently valued at $10.8 billion, but Miller states that full U.S. legalization could skyrocket that figure to $300 billion almost instantly.

Right now, marijuana is legal in some form in 32 states and the District of Columbia. But the prospects for 2020 pot legalization can expand that even more now that these 10 states have various measures pending related to legal cannabis.

You can find more of what Greg Miller has to say about this right here. Now, here are the 10 states most likely to legalize cannabis in 2020.

Cannabis is already legal in Missouri for medical purposes, but the state has been watching its neighbor (Illinois) and could follow suit to expand its marijuana laws in 2020.

The Marijuana Legalization and Expungement Initiative would legalize cannabis for recreational use. This measure could be on the 2020 ballot if it gets the signatures it needs by May 3.

This is another state that legalized medical marijuana several years ago. In a 2016 poll, 70% of citizens were opposed to recreational marijuana, but that number dropped to 53% last year.

One measure, called the Arkansas Recreational Marijuana Initiative, is likely to make it on the ballot in this state in November. There are two other measures circulating for signatures as well.

Medical marijuana became legal in North Dakota in 2016 after failing to pass in 2015. Currently, the state's only ballot measure is called the North Dakota Marijuana Legalization Initiative.

If it gets enough signatures by July, it will get on the ballot in November. This measure would make recreational marijuana legal for anyone over 21 in the state, but it currently only has about 51% support according to a poll by Legalize ND.

Currently, nothing pot-related is legal in South Dakota, but they're working on it. The state has two potential ballot measures forthcoming, one for medical cannabis and another for recreational use. Both already have more than the signatures needed to make it on the ballot.

Prior attempts to make this happen in South Dakota were either thwarted by lawmakers or a lack of signatures. But times and sentiment are changing. Even so, medical cannabis approval is likely to come first.

Mississippi is another state that is surprising people with its support for legalized pot. More than 214,000 signatures have been collected in support of legal medical marijuana by a group called Mississippians for Compassionate Care.

The measure is called the Mississippi Medical Marijuana Amendment of 2020, and it appears to be guaranteed inclusion on the ballot in 2020. So far, about 67% of Mississippians support legalized cannabis for medical purposes.

If you are caught in possession of pot in any form in Idaho, you'll currently be in big trouble. Penalties include fines up to $10,000 and five years in prison. But Idaho voters hope to change that in the coming year, considering the state is surrounded by places that have legalized the substance for recreational use.

Since it will take baby steps to get there, Idahoans will start with medical marijuana. Currently, 73% of residents support this while just 43% back it for recreational use. So, there's a good chance the state's Medical Marijuana Initiative will pass in 2020.

Nebraska has two marijuana petitions circulating at the moment. So far, state lawmakers have rejected bills legalizing medical marijuana three times. But the Medical Marijuana Initiative for 2020, backed by the group Nebraskans for Sensible Marijuana Laws, is gaining support.

Another initiative, called the Cannabis Legalization Initiative, would make marijuana completely legal statewide. This is less likely to pass.

The medical cannabis measure is still collecting signatures, but it has the support of roughly 77% of the state's voters if it makes it on the ballot in November.

Medical marijuana is not only legal in Arizona, but the state is already home to several large cannabis cultivators. Further, the state is likely to face pressure from other Southeastern states such as Colorado, California, and Nevada that will benefit from "cannabis tourism."

Just over 52% of Arizonans support recreational marijuana legalization, and this is something that will be placed in the hands of voters in November.

New Jersey has been debating making recreational cannabis legal for several years. The governor was in favor of its passage, but half of the legislators were not.

However, 68% of the citizens of New Jersey want legalized marijuana according to a recent Monmouth University poll. The good news is it's going to be on the ballot in 2020.

Medical marijuana is already legal in Florida, but citizens of the Sunshine State are pushing for full legalization. There are four ballot initiatives getting signatures, and the biggest one has about half of what it needs so far.

With 64% support, Florida is the most likely state to legalize recreational cannabis in 2020. The state also has the second highest growth rate of medical cannabis patients daily. We'll see what happens in November.

Don't Miss the Next "Big One": Anyone who passed on a little-known tech company in 1997 is haunted by a lost 11,200% windfall, as it went on to be an industry giant. Today, folks who snub the cannabis sector could be tomorrow's cautionary tale. You're not too late to lock in an opportunity on the ground floor, but this window won't stay open long… Click here for the details…