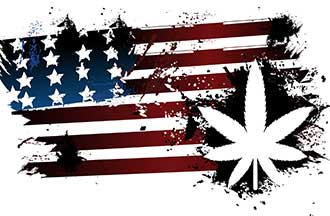 The Executive Director for the National Institute for Cannabis Investors, Greg Miller, says marijuana could explode into a $300 billion global industry if it were to be federally legalized in the United States.

In fact, the six best-selling marijuana states in 2020 emphasize just how big the marijuana industry is becoming.

The global marijuana market is already worth roughly $10.8 billion right now. But Greg Miller thinks it could soar into the stratosphere thanks to legal marijuana states in the U.S. With potential federal marijuana legalization on the horizon, Miller says it could even shift the industry's global value to $300 billion "practically overnight."

Marijuana is legal in one way or another in 32 states and Washington, D.C. And six of these states are making millions – if not billions – from marijuana sales as we speak.

According to American Marijuana, these are the six highest predicted earning marijuana states for 2020:

You can learn more about what Greg Miller has to say about marijuana legalization here. Now, we're going to show you the states with the current top estimated marijuana sales for 2020.

The Best-Selling Weed States, No. 6: Nevada

When it comes to legalized cannabis, Nevada is one of the oldest players in the game. In 2001, the state legalized medical marijuana, while recreational marijuana became legally available in 2017.

Even though Nevada isn't the only state in the area with legalized marijuana, its tourist locations like Las Vegas and Reno have drawn in hundreds of millions in marijuana sales. In fact, this state with legal recreational weed has made over $639 million in revenue from selling marijuana, according to MJBizDaily.

The Best-Selling Weed States, No. 5: Massachusetts

Back in 2008, Massachusetts citizens voted to decriminalize small amounts of cannabis. Then, in 2012, Massachusetts became the 18th state to legalize marijuana for medical use.

Once 2016 rolled around, the state completely legalized recreational marijuana. Even still, over 100 individual towns in the state, like Chatham, Dennis, Falmouth, and Yarmouth, have banned retail marijuana stores.

Fortunately, the marijuana market is thriving regardless. American Marijuana estimates that Massachusetts' marijuana revenue will be roughly $729 million for 2020.

The Best-Selling Weed States, No. 4: Oregon

Oregon's decriminalization of small amounts of marijuana dates back as far as 1973. Twenty-five years later, in 1998, Oregon voters approved medical marijuana use – even making it legal for certain people with qualifying medical conditions to grow it themselves, according to Oregon Live.

Between 2004 and 2015, the state continued to increase the amount of medical marijuana its citizens could possess. But it ran into hiccups along the way. In 2004, 2010, and 2012, voters rejected the retail sale of medical and recreational marijuana.

Now, the state is estimated to have over $954 million in marijuana sales in 2020, according to American Marijuana.

The Best-Selling Weed States, No. 3: Washington

Washington State is a historic one for cannabis history. While it legalized medical marijuana in 1998, it became the first state to legalize recreational marijuana in 2012.

As of 2018, its number of marijuana retail stores has rocketed up to 103, according to High Times. And now, American Marijuana estimates Washington's 2020 marijuana sales at roughly $1.64 billion.

The Best-Selling Weed States, No. 2: Colorado

Colorado voters approved medical marijuana back in 2000. This legalization enabled patients to possess two ounces of medical weed and cultivate up to six cannabis plants. Twelve years later, it became the second state to legalize recreational weed – just one month after Washington state.

Since then, Colorado has become synonymous with all things marijuana, with cities like Denver becoming one of the definitive hot spots for tourists to visit and use cannabis.

Back in 2017, Denver saw more than 17.4 million overnight visitors that spent $5.6 billion while visiting, according to Denver.org. And between 2013 and 2018, 25% of all tourists listed marijuana as a reason for their visit.

Now, revenue from marijuana sales makes up over 3% of Colorado's $30 billion budget, according to CNBC.

This has helped push Colorado's marijuana sales at an estimated $1.76 billion, as reported by American Marijuana.

But the top-selling marijuana state in 2020 has made over $3.1 billion from marijuana sales…

The Best-Selling Weed States, No. 1