Stock prices do not always reflect reality. Stocks actually have a real value that underlies the price listed on the exchange. And we have good reason to believe one FANG stock is undervalued by the market right now.

In fact, once you see this chart, you'll know why.

Whether or not a stock's price reflects its actual value greatly depends on one factor: the public's level of enthusiasm. 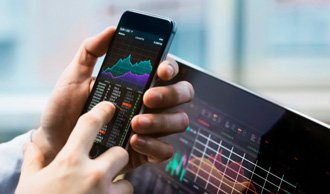 But there's some good news to this gap between perception and reality. The gap actually creates opportunities for savvy investors.

Amazon has been lagging its other big tech stocks for months. In fact, since peaking in July, when it briefly reached a $1 trillion market cap for the second time, it is down 7.1%. That's even counting its late-December surge. Contrast that to the tech-heavy Nasdaq, up 10.1% over the same time span.

Take a look at how Amazon has fallen behind the FANGs over the last six months... 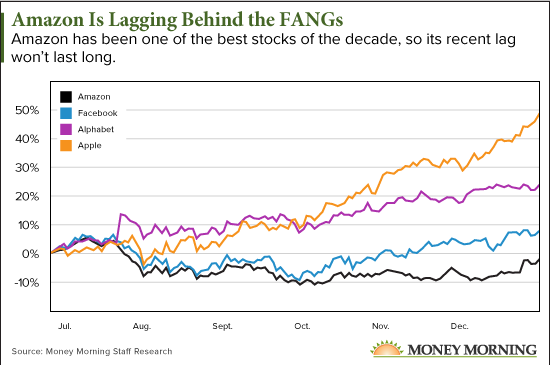 But here's why that doesn't reflect the actual value of Amazon stock.

In fact, D.R. says Amazon is delivering more packages than FedEx, UPS, and the U.S. Post Office combined. It went from zero deliveries to leading in just two years.

It's part of why D.R. believed the lag in Amazon stock performance was a blip. In reality, he said, the company was firing on all cylinders.

That means Amazon is lagging the FANGs for no real reason. And that also means there's upside for you.

Just after the Christmas break, on Dec. 26, Amazon shares jumped 4.4%. This followed a company report on its holiday shopping season success.

The company said it was "record-breaking," selling billions of items. In fact, the company said deliveries to Prime subscribers nearly quadrupled from the same time in 2018.

But there is still plenty of room for gains, as the stock is still well off its highs and lags behind its high-tech cousins.

Of course, the high stock price can be a barrier for many average investors. But if you do not have the $187,497 needed to buy 100 shares at last week's closing price, there is another way to ride this stallion.

How to Profit from Amazon Stock Without Buying a Single Share