With the coronavirus crash taking 23% off the Dow Jones Industrial Average to date, more folks are catching the "buy the dip" wave, especially when it comes to tech stocks.

But not every stock is worth owning, even if you're getting a discount. With all the hype surrounding tech, it can be harder than ever to separate the winners from the pretenders. 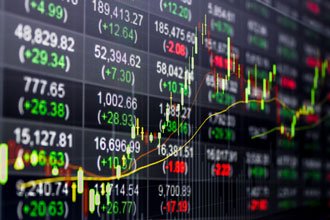 The tech industry is one of the surest bets for the future - AI, 5G, Big Data, Virtual Reality, and everything between.

The five most valuable U.S. tech companies, which dabble in all of these sectors, are together valued at $5.2 trillion, according to FactSet. By 2030, AI alone is expected to add $15 trillion to the world economy.

We'll start with the bad news.

Hewlett-Packard, or "HP," is down more than 70% for the year. To the naked eye, that looks like an awesome discount on one of the most well-known tech stocks around.

But sales have been slowing down for this computer company. Since 2016, sales have dropped from $35 billion to $19 billion. That 45% drop has raised questions over whether the company can compete with the likes of Google, Apple Inc. (NASDAQ: AAPL), and Microsoft Corp. (NASDAQ: MSFT).

This company has had a problem with putting all its eggs in one basket. While it succeeded selling hardware for a time, it didn't have the foresight to build an ecosystem around those devices. Now, much of the money has shifted away from devices toward cloud services.

Groupon has been one of the most disappointing stocks over the last few years. The global e-commerce marketplace debuted at $20 per share in 2011, and since then, it's plummeted to under $1.

This company used to be an exciting opportunity, getting big discounts for users at a wide range of merchants. But its negotiations with merchants eventually came to a head. Many merchants ended up backing out because the discounts proved unprofitable.

This is a perfect example of when "buy low, sell high" is bad advice. Because Groupon isn't going higher. It was headed down long before the coronavirus tanked the market. Its free cash flow plummeted 99% in 2019 from $102 million to $217,000.

Now that people are going out to stores even less, Groupon will take a hit.

The Uber Eats business may have thrived for a moment as the coronavirus lockdown was introduced. But ultimately, business for drivers is slowing down with people staying home.

Uber's financials weren't sound to begin with. Negative cash flow has gone from $2 billion to nearly $5 billion. The company has struggled to get profitable, going from $4 billion to $8 billion in the red since 2017. In fact, at its IPO last year, it warned investors that it may never be profitable.

The company has been in a price war with other driving services like Lyft Inc. (NASDAQ: LYFT), making rides dirt-cheap. The only battlefield left will be innovation in driverless vehicles. But with Google and Tesla Inc. (NASDAQ: TSLA) taking the lead in that sector, chances of success are slim.

Those are the tech stocks to avoid this year. Now, here are your buys. One of these has the potential to gain 78% before the end of the year...

Apple stock currently trades for $279.27. It's only down about $20 year to date, but that's about as good a discount as you're going to get on this stock.

Bill Patalon recently wrote that it's just a matter of time before Apple reaches $400. He touted Apple's "tons of cash and a bulletproof balance sheet" as reasons to buy. But what separates it even from other buy-and-holds is how it continues to expand its "ecosystem."

Not only is the company on its way to releasing new phones and computers, but it's expanding beyond tech. Hardware has become a kind of "bait" for Apple to lure consumers into its expanding services.

Now, Apple CEO Tim Cook has said that healthcare could be Apple's "greatest contribution to mankind." That's no stretch, given the company's pioneering of "ecosystems" and the growing Internet of Things. The company plans to integrate a variety of its devices and use AI to provide deeper analytics for health monitoring. It's also partnering with hospitals for better monitoring technology and more streamlined communication between healthcare professionals.

Grab some Apple shares while you can.

Microsoft hit a valuation of $1 trillion just a year ago, joining Apple, Alphabet Inc. (NASDAQ: GOOGL), and Amazon.com Inc. (NASDAQ: AMZN) in that select group of American companies. The difference is you can still buy shares of Microsoft for $172, while Alphabet and Amazon go for over $1,000 and $2,000 per share, respectively.

Microsoft has also proven one of the more resilient stocks amid the coronavirus crash. It's actually up 7% since the start of 2020. A large part of this is revenue from its Azure cloud service. Azure has continually beat revenue expectations in the last couple years. For Q4 2019, Azure revenue was up 64%.

The cloud platform has been applied to business, personal, gaming, and government purposes. Microsoft is continuing to plant servers across the globe, and that's only going to send the stock sky-high. Analysts give it a $210 target for the year, which is growth of more than 20%. This is one of the steadiest-growing stocks around.

This next one is a slightly more speculative play. But the need for this service has grown 100% over the last five years.

And it's only increasing...