Grand View Research expects the 5G industry to reach $46 billion next year, with a compound annual growth rate of 43.9%. For perspective, the S&P 500 average CAGR is 7%.

We're going to show you some of the best 5G stocks to buy to take advantage of this. 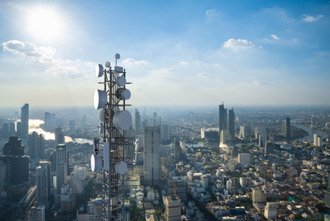 By now, you have heard about 5G communications and how it is going to drastically change the way we live, work, and play. The Wall Street Journal says 5G is already clocking in speeds that are as much as 100 times faster than current 4G networks. And that will enable faster communication than ever.

Until now, that probably sounded like a dream. But the T-Mobile--Sprint merger of last year just made it a reality. They're proving that 5G speeds are more than hype and how it is going to change the world as we know it.

On April 1, wireless carrier T-Mobile US (NASDAQ: TMUS) announced that it had completed its merger with rival Sprint Corp. (NYSE: S) to create a new carrier that will focus on its 5G network. The company said it will deliver 5G capability to 99% of the U.S. population, including rural areas.

The new company may still trail its big competitors AT&T Inc. (NYSE: T) and Verizon Communications Inc. (NYSE: VZ) in revenue, but it controls more of the communications bandwidth than the big guys. And in the critical fast mmWave bands, where all the 5G power is unleashed, it is second only behind Verizon.

One Crazy Question, One Crazy Windfall Opportunity: What if You Can Profit from the Internet? Details Here...

Competition in the first big cities like Philadelphia is fierce. But T-Mobile is already well-positioned for victory. That will only ramp up the innovation in other cities and in industries that will rely on 5G to carry out their own missions.

T-Mobile reported doubled 5G network speeds from the merger. And now, the proof is in the pudding...

Why the 5G Industry Is Unstoppable