It's known as the "blockbuster," and it's the Holy Grail in the world of medicine - a Big Pharma drug that generates big yearly and lifetime sales because it targets a big opportunity in maladies that afflict millions of people.

Indeed, the three biggest blockbusters of all time target high cholesterol (Lipitor), inflammatory diseases (Humira), and digestive afflictions (Nexium) and have pulled in a combined $350 billion - and counting.

Many of these diseases are genetic, appear early in life, and are tough to treat. Indeed, while more than 7,000 rare diseases have been identified, about 95% have no approved therapies.

As many as 30 million Americans live with some type of rare disease, says the National Center for Advancing Translation Sciences Genetic and Rare Disease Information Center (GARD).

Compare that with diabetes - which all by itself affects more than 30 million Americans.

Given that drug firms and biotechs alike are striving for that Holy Grail blockbuster - and thus are targeting the maladies with the biggest number of sufferers - what's the outlook for rare-disease sufferers? Will drug companies develop drugs to ease their suffering?

Thankfully, the answer increasingly is "yes."

Here in America, Washington understands the need for these "orphan drugs" targeting rare diseases - and actually created financial incentives to encourage drugmakers to develop them. The "Orphan Drug Act of 1983" offers a seven-year window of tax reductions and the exclusive right to market a drug for a particular rare disease.

The incentives are helping. North America leads the world in orphan drugs. Here in the United States, the number of orphan drugs coming to market has zoomed from a single digit in 1983 to 40 the next year to 121 in 2007.

To date, more than 600 orphan drugs have been approved by the U.S. Food and Drug Administration (FDA). 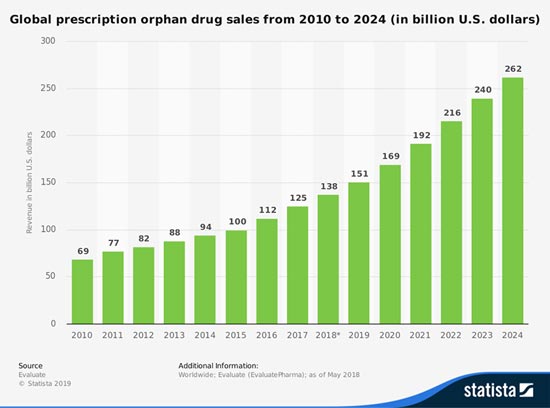 And the global market for orphan drugs targeting rare diseases is growing at double the rate of the non-orphan market. In 2017, $125 billion worth of rare disease drugs were sold - a total that will grow at a compound annual growth rate (CAGR) of 11.3% between now and 2024, when it reaches $262 billion.

That total would account for 21.8% of the $1.2 billion prescription drug market.

More needs to be done. And that "more" will create a massive investment portal - provided you pick the best-positioned companies.

That's why today, I'm going to show you a revved-up leader in the specialty-drugs market whose shares could double in under three years...