When I was a kid, the electric vehicle (EV) was "Futureworld."

There were a couple here and there you mostly saw in magazines, or, if you were really lucky, you might've seen one on the road, but mostly they were something to daydream about and draw on construction paper.

But the truth is, electric cars have been with us since the 1880s. They even held land-speed records until 1900 or so. 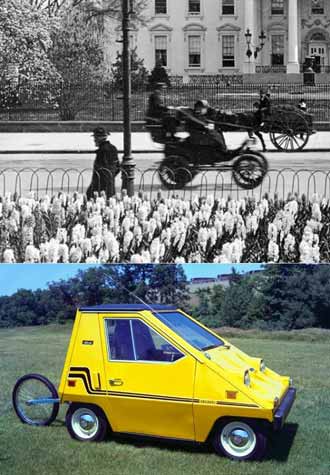 Those must have been some heady days back then, because, when I was young in the 1970s, electric cars really weren't all that impressive except in kids' drawings.

Check out the Sebring-Vanguard Citicar, a really funky-looking boxy wedge that packed 3.5 horsepower under the hood... or wherever the heck they put the battery.

It had a range of around 40 miles, could do the zero to 25 in just over six seconds, and the speedometer topped out at 38 miles per hour.

Believe it or not, this doodad was the top-selling electric vehicle of all time - about 4,500 were made - until Tesla Inc. (NASDAQ: TSLA) came out with the Model S in 2012.

Electric vehicles are finally "here." To stay. They have nice, practical, long ranges and can easily do highway speeds (and a whole lot faster, some of them).

These things are taking over the automotive industry. BloombergNEF just reported that electric vehicles will account for 10% of global passenger sales by 2025. That number is expected to jump to 28% in 2030 and 58% in 2040.

If you're into cars, it's really cool to see the electric vehicle trend build momentum.

And, if you're into making piles of cash, it's great news to see that EV makers are becoming diverse and profitable. In other words, you're no longer limited to "just" Tesla.

We've already had a taste of how lucrative this sector can be. I mean, Tesla just reached the highest market cap in the automotive industry - a cool $281 billion.

So, the assumed answer to "How do I profit from this electric car explosion?" is, "Simple: Buy TSLA shares."

And that's a great, long-term play.

But the truth is Tesla's ship has already sailed. The people who were going to make fortunes on TSLA shares have probably already made them. In terms of its real price and price/earnings ratio, it's one of the most expensive stocks on the market right now, trading north of $1,400 per share.

That begs the million-dollar question: "Well, what company is the next Tesla?"

The Next EV Superstar Is About to Hit the Market

I'm talking about Lordstown Motors Corp. And you can't buy its stock; it hasn't gone public yet. But there is an easy way to cash in on it. 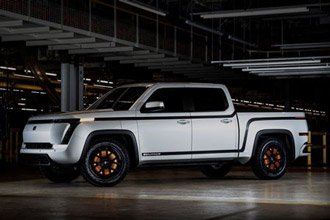 The Lordstown, Ohio--based firm is a private company that is in the process of manufacturing electric trucks, like this one (Photo credit: TheVerge.com).

The Lordstown head honcho is CEO Steve Burns - pretty much everything Burns does is big.

This guy knows his way around top market movers and is the brains behind these companies' major products.

But Lordstown's product is unlike anything we've seen before.

The truck hasn't even been unveiled yet, and demand is already high. Lordstown Motors currently has $1.4 billion in preorders for the Endurance.

Why so much demand for a virtually unknown company? Well, one of its backers is an automotive giant. Back in November 2019, Lordstown purchased a 6.2 million square-foot General Motors Co. (NYSE: GM) assembly plant in Lordstown itself. And with a strong vote of confidence, General Motors has invested $75 million in the venture.

Investors can see that, and it's likely only a matter of time before Lordstown takes its shares public to sell on the open market.

But you know how I feel about initial public offerings (IPOs). Given that the company hasn't delivered its first vehicle yet, this investment would be considered speculative and, therefore, risky.

But, as we've seen, the greatest rewards come from the greatest risks. If you're comfortable with your risk tolerance, and you use sensible position sizing, there is a way to profit on this company.

As luck would have it, Lordstown Motors has begun a special IPO process with something called a special purpose acquisition company - commonly called a "SPAC" IPO.

Here's What's Special About This IPO

First, an IPO is the process of offering shares of a private company to the public via a new stock issuance. Some refer to the process as "floating" the company. This process provides an influx of capital to the company, but it takes months to complete.

IPOs are tough because some fail while others succeed. Recent successful IPOs include the likes of Beyond Meat Inc. (NASDAQ: BYND), Crowdstrike Holdings Inc. (NASDAQ: CRWD), and Zoom Video Communications Inc. (NASDAQ: ZM).

A SPAC (short for special purpose acquisition company) is a company with no commercial operations that is formed strictly to raise capital for an IPO with the sole purpose of acquiring an existing company. Some pros call them "blank check companies." SPACs can be a great and expeditious vehicle for a private company to go public.

Now, a few days ago, a SPAC called DiamondPeak Holdings Corp. (NASDAQ: DPHC) announced its intentions to merge with Lordstown Motors in a deal that values Lordstown Motors at $1.6 billion. Remember: Lordstown has $1.4 billion in pre-sales on the books already, so that valuation may very well be low.

The news sent the stock up 47% in two days. Once the merger is complete, the ticker symbol will be changed from "DPHC" to "RIDE."

And if you find this opportunity compelling, you don't need to wait until the merger is complete.

One way to play it is to buy shares of DPHC outright and get in months before the actual merger. Of course, the stock has risen a lot over the past few days, but that's why this is a speculative play.

You Could Supercharge Your Stock Returns

But, of course, there's a catch: Due to market conditions, there's just a small window of time for a shot to make these supercharged profits. Right now, the market is undergoing a phenomenon I've only seen three times before - and these markets are going to change fast.

To learn how you can take advantage of this opportunity now, before it's too late, click here for the details.

TOM I AM LOOKING FORWARD TO WHATS NEXT, YOU ARE THE BEST!