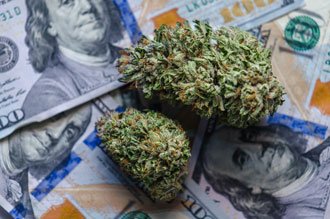 While everyone was busy focusing on the presidential race Tuesday, five states were voting on another important issue: cannabis legalization.

This should prove to be a massive catalyst for the industry expansion in 2021 and beyond as all five states approved some type of legalization.

Mississippi approved cannabis for medical use.

And South Dakota approved both recreational and medical use at the same time.

This is huge news for the legal cannabis industry.

We've said in the past here at Money Morning, that it's not a matter of if but when cannabis is fully legal across all 50 states.

And this election cycle was just another sign we're on that path.

But not every pot stock is going to benefit the same.

That's why I went digging for the companies that stand to benefit the most from these five states passing new laws.

Below are the top two marijuana stocks to buy now.

One could even double your money over the next year...

The Best Cannabis Stock for Income

The company's strategy is to acquire as many profitable medical-use cannabis facilities as it can in the United States.

It already has two locations in Arizona and could expand to South Dakota, New Jersey, Mississippi, and/or Montana next.

What makes IIPR so unique is that it's one of the rare income-generating plays in the legal marijuana space.

So, investors can profit off the growth of the cannabis industry itself AND get paid a solid dividend in the process.

Since it's structured as a REIT, IIPR is legally required to pay 90% of its taxable income to shareholders in the form of dividends.

Currently, IIPR pays a 3.5% dividend yield (double the S&P 500's 1.75% yield), which it's been sending to stockholders consistently since the second quarter of 2017.

Innovative Industrial Properties' financial model combined with expected sales growth of medical cannabis in the United States growing from $12.4 billion in 2019 to $34 billion by 2025 sets the stage for income and growth investors to profit off this stock for several years to come.

Curaleaf Holdings Inc. (OTCMKTS: CURLF) is headquartered in Wakefield, Mass. The company cultivates and sells medicinal and recreational cannabis in the United States.

Curaleaf has operations in 23 states with over 135 dispensary locations, including New Jersey and Arizona. And it already has plans to open in North Dakota.

So it wouldn't surprise me to see the company to expand to Mississippi and Montana with the new laws passed there.

That acquisition cemented Curaleaf as the world's largest cannabis company, expanding its presence from 18 to 23 states, with the ability to offer medical or recreational cannabis to more than 192 million Americans.

The thing I like most about Curaleaf is that it manages the entire cannabis operation itself. From the time the seeds are planted into the ground to the time it's sold at a dispensary, Curaleaf controls it all.

The company has 22 cultivation sites with 1.6 million square feet of cultivation capacity, 30 processing facilities, and 135 dispensary locations for customers to purchase its products.

This allows Curaleaf to profit from both sides of the business, generating more sales than companies that just do one or the other.

Curaleaf is growing quickly, too.

Look for CURLF stock to beat analyst estimates when it reports later this month and the stock to pop.

My price target is $20 per share by this time next year, representing over a 100% return for investors.