2020 changed the world, alright, but some of the biggest changes I saw were in the markets.

I'm talking about the 2 billion people, 72 million in the United States alone, who used mobile apps to dive headfirst into the market to become investors and traders overnight.

One French-Chinese academic study found Robinhood accounts rose 14.3% in just the first week of the March 2020 lockdowns. By mid-June, 2020, those app-based accounts doubled.

These amateur folks are aggressive speculators; a lot of them are young, and almost all of them are inexperienced, but you can't deny they're a force to be reckoned with.

I mean, these new traders have put $11 million up for grabs every second of every trading day. There's extreme moneymaking potential in their trading activities for folks who know how to play it.

I'm using some of the volume and pricing data I've seen from this new crowd to tee up an interesting profit play I think seasoned, experienced investors can make.

It's deceptively simple and, I admit, it's pretty low-key compared to some of the stock headlines we've seen over the past year - we're talking "just" a 100%-plus winner here...

Whether they meant to or not, these new investors and traders helped push the market off its March 2020 lows and generated enough volume and liquidity to send stocks on the biggest, fastest bull run in the history of stocks.

Think about the "pandemic stocks" that soared by triple digits in a lot of cases. Zoom Video Communications Inc. (NASDAQ: ZM) is a perfect example; that stock went as high as 330% between March 23 and Oct. 16, 2020.

Sure, a lot of these businesses were well-positioned to meet Americans' needs during COVID-19 lockdowns, like video teleconferencing, home delivery, exercise gear, and streaming entertainment, to name a few, but high-volume speculation from tens of millions of amateur traders fueled a lot of gains there.

And who could forget GameStop Corp. (NYSE: GME) and the "meme stocks?" Millennial traders sent GME on a crazy, 1,900%-plus ride in January; if that's not aggressive speculation, I don't know what is!

Here's the thing... These folks are moving the markets again right now. I'm putting the finishing touches on a free, online-only event where I'll be revealing my findings on this powerful market phenomenon. I'm taking it live on Thursday, April 15 at 1 p.m. Eastern - you'll be able to claim a spot below in just a minute.

But for now, it's enough to say there's a lot of potential profit on the table for people who play it right.

Like they say, "what goes up must come down." Over the past month or so, we've been talking about a big rotation in capital out of the stocks that did great during 2020.

The "COVID stocks" are falling, and one in particular looks like it's packed with "downside" profit potential.

You rarely heard of Peloton Interactive Inc. (NASDAQ: PTON) before the pandemic broke out, but its exercise bikes exploded in popularity as folks were stuck at home during the pandemic. Now, "exercise bike" doesn't quite do these contraptions justice. This ain't your granddaddy's exercise bike, which might or might not have had an analog odometer that tracked your distance pedaled.

Peloton makes high-end "connected" exercise bikes and treadmills. The pitch for Peloton machines was to give people a little (or a lot) of the experience of a group exercise class at home.

Peloton machines have touchscreen capability that tracks all kinds of fitness stats, but the disruptive idea there was to equip the machines with touchscreens that, for a $12.99 monthly fee, would stream all kinds of fitness classes and programs like running, cycling, aerobics, even yoga. The bikes have the ability to connect you with friends, too, which was a huge plus during the social isolation we went through.

RELATED: You can learn how to start using artificial intelligence to predict (with up to 95% historical accuracy) stocks' movements. Learn how...

So, yes, the company was really well-positioned to thrive in a pandemic where millions of people had to stay inside and find something to do with themselves.

But the tens of millions of new investors in the market meant enthusiasm for this stock was off the charts.

You'd think a company in a good position to thrive would see its share price increase - that's pretty much a no-brainer. But that increase was more than 643% in seven months.

And Peloton was hardly alone. Like I mentioned earlier, Zoom shares went higher than 330% in about the same time.

That's how powerfully these newer, more aggressive speculators can move stocks. But it cuts the other way, too.

The release of the new COVID-19 vaccines has basically spelled the end of the party for Peloton and the other pandemic stocks that new retail investors plowed tens of billions into. Peloton is already down more than 30% from its 52-week high. 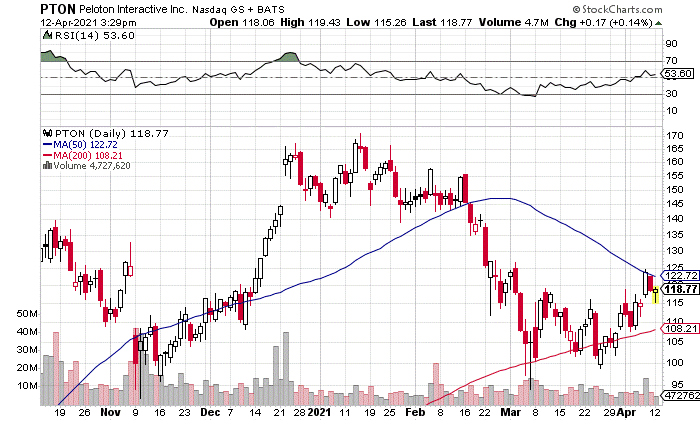 So, there's a move that more experienced, seasoned traders can make here that could very well double our money before all's said and done.

But I don't think they're looking in the right place now. Using what we know about their trading habits, we can get out in front of them - like the "smart money" - and make an easy trade that could very well double up.

The smart money right now is looking at buying out-of-the-money (OTM) put options on Peloton stocks, where the strike price is less than the current stock price. Puts are a great way to make money as a stock declines; it's much, much safer than outright short-selling. I think the PTON July 16, 2021 $100 puts look good right now. You can get control of 100 shares for around $6.50 each, or $650 per option - that's less than the price of five shares right now, and if the stock drops below $100 before expiration, you'd exit for a tidy profit.

There's a lot more to this "millennial market mania" phenomenon - these new folks have put $11 million up for grabs every second of every trading day! Folks with the right strategy, tools, and experience to capitalize on all the speculative "dart throwing" at stocks could possibly clean up. I've been crunching some numbers on this new market reality, and my backtesting revealed opportunities for 300% in three days, 471% in 19 days, and even 650% in eight days. I'm calling these "Surge Strike" trades. On Thursday, April 15, at 1 p.m. Eastern, I'm going public right here with all my findings on this phenomenon; I'll be revealing how I've been able to score such massive returns and how I plan to keep the profits rolling. You can click right here to RSVP to this free online event.