Verizon, one of the biggest telecoms in the world, picked up the two properties, one in 2015, the other in 2017, for $9 billion all told. At the time, the dealmakers rationalized the outlay by declaring their intention to compete with the likes of Alphabet Inc.'s (NASDAQ: GOOGL) Google and Facebook Inc. (NASDAQ: FB).

I hope no one at Google or Facebook lost any sleep over the competition, because clearly it hasn't worked. In fact, the two media units were an increasing drag on Verizon's bottom line.

The writing's been on the wall for this one for a long time, and Verizon's willingness to take a $4 billion-plus hit - selling at $5 billion what it paid $9 billion for - shows how eager it is to get out of the media and digital advertising space... and re-focus on where the growth really is: 5G.

The Sale Lets Verizon Be Verizon

I think this is a great move - despite the $4 billion loss, this is ultimately going to be a textbook example of what a good deal can do for a stock that hasn't exactly been soaring lately.

At the end of the day, the $4 billion hit Verizon's taking to make the Yahoo/AOL deal work with Apollo won't amount to much. It's going to recoup around the $5 billion it would've eventually lost if the deal hadn't happened. The market's thinking it's better to lose $4 billion than $9 billion - or worse.

It's good to try new things, but probably it's best if telecom companies leave ten-figure media deals to media companies. Apollo is private equity, not strictly a media company, but it owns or has a stake in several big, successful media operations, like USA Today'spublisher, Gannett, New Media Investment Group, and Cox Media Group, so it has experience and a big presence in the space. And it's worth noting that Yahoo and AOL do bring in respectable revenue numbers - a little less than $2 billion in 2020 - from their Yahoo Finance, Engadget, and TechCrunch outfits. Apollo will do well here.

Find out how to get Andrew Keene's weekly Watch List of stocks, plus all his trade recommendations.

Find out how to get Andrew Keene's weekly Watch List of stocks, plus all his trade recommendations.

Apollo executives, quoted anonymously in The Wall Street Journal, said Verizon's "positioning of the media business as a complement to its core mobile business... meant it hasn't pursued some opportunities to maximize the value of each asset." Tough to argue with that!

The truth is Verizon stopped trying to execute on its media/digital advertising strategy as far back as 2018, when it sold off its HuffPost property to Buzzfeed and closed down Tumblr; they've been moving toward an exit for a long time now, and this is it.

Not a moment too soon, the way I see it.

Verizon has, over the past year or so, become one of the early leaders - if not the leader - in the multitrillion-dollar nationwide 5G communication technology rollout. Its focus has to be on 5G, and it appears that's just what it's doing and, from the day the deal closes, doing it without the extra hassle and expense of a media arm.

The company has already made some impressive moves to position itself; it's building out ultra-enhanced 5G capacity in places like stadiums, urban cores, and parks, where its research shows users want high speed and high capacity. The company actually has a partnership with the National Basketball Association (NBA) to offer this extra capacity in something like 54 stadiums and arenas - which are now filling with people again. Verizon's $52 billion investment in 5G is going to allow it to transition its current 4G users to 5G seamlessly, offering a truly "upgraded" experience.

The company had ambitious targets for 2020, and despite the pandemic, hit or exceeded them, according to an interview with Verizon's Vice President of Technology, Heidi Hemmer - they built ultra-wide-band millimeter-wave 5G capacity in 61 cities, and they're aiming to have completed 80 in total by the end of this year, to the point where coverage will extend to 200 million people.

What to Do About Verizon Stock Right Now

I think this makes Verizon a buy, particularly here below $60. But we could have a chance to own it even cheaper. 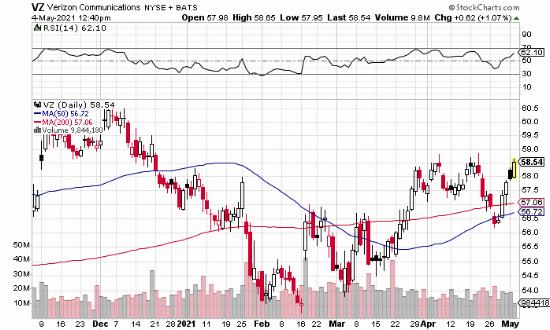 You can see it's just broken above its 50- and 200-days simple moving averages, but its relative strength index (RSI) reading is looking a little dicey there above 62. The closer the RSI gets to 70, the more "overbought" the shares are becoming, which strongly suggests a reversal could be in the mail. I think the smart thing to do is to establish a position here at $58.50 or so and add more when the stock moves lower, reducing your overall cost.

Verizon is a great long-term play now that it's free of all that media baggage, and here's why.

There's the growth of 5G itself. As I said, Verizon has already laid the groundwork to become an early nationwide provider of the revolutionary, blazing-fast 5G wireless services. I've seen credible estimates that show more than 525 million 5G-capable smartphones will be sold in 2021, and another 700 million in 2022. Not only do I like that outlook; I think the best 5G profit potential could be found in the secondary "5G aftershock" market. I think most industries and most companies could be impacted by this $1.4 trillion "transformation," but my colleague, Michael Robinson, has more on 20 small "Aftershock" stocks that could each be projected to return 1,000% within eight months - take a look at this report here.

VZ stock hasn't exactly packed on the profits latterly, but it's been one of the best dividend-payers on the market. Management's currently paying out $0.6275 per share per quarter, or $251 annually. That's an inflation-beating yield topping 4.3%, and it's safe, too; the company has stable financials - soon to be improving, I'd say - and a history of dividend increases every year for the past 15 years.

My proprietary S.C.A.N. algorithm, which helps me track massive flows of money in and out of stocks all over the market, has picked up some unusually high buying activity on some Verizon call options - an incredibly bullish signal because it means big, deep-pocketed institutions - aka the smart money - are moving into position. It's safe to bet that they're looking for the same kind of performance we are.

In fact, I've been perfecting a system to generate some extremely profitable ways to trade - a 71% win rate and some of the best numbers in Money Morning history - 410% in one day on GILD, 188% in one day on TSN, 251% in 33 days on SHAK, and 271% on HUYA. Those are real numbers - no backtesting, no projections, but real money and real trades. The results have been so good, my publisher parked me in front of a camera to go over the details of the system - and walk everyone through a complimentary recommendation with the potential to return 300% in the next three months. You can watch it right here.