If you've been with me for a while, you'll know I'm not a huge fan of the tech sector.

I know, I know - that's practically heresy coming from a stock-market guy, but I can't dance around it. I'm on the record.

I don't hate it, and I don't scrupulously steer clear of tech stocks, mind you. I don't really think there's anything wrong with tech stocks, aside from maybe some wonky valuations. It's just that I believe the serious growth for the next decade or so is going to be found elsewhere.

I often say the green energy sector is the "new tech," for instance, not just because it's technology-driven, but because it's going to generate big-time returns from here on out.

Having said all of that... I'm about to eat my words - just a bit. More of a light snack, really.

And I don't mind, because today, I'm recommending we move into a fast-moving, small-cap tech penny stock that's just experienced a series of profit catalysts that'll send it much higher from here.

You've Got to Listen to the Data

The data is telling me, "Hey, your own personal tech sentiments aside, this tech stock is going higher. Much higher."

The tech stock in question is Netlist Inc. (OTC: NLST). It's by no means a household name like Alphabet Inc. (NASDAQ: GOOGL) or Intel Inc. (NYSE: INTC). Then again, the shares don't cost "Google money," either - those were trading somewhere north of $2,400 last I checked.

Netlist trades for just under $8 right now. It's a 21-year-old company based out of Irvine, Calif., that manufactures and sells all kinds of memory subsystems for computers and communication devices. That's "memory" as in storage, but also flash memory and DIMMS that boost a device's performance.

I've been tracking NLST for months now, and I recommended the shares to my free Penny Hawk readers earlier this month, and those who were following along with me have already pocketed nearly 17%. Over the same time frame, the S&P 500 is up less than 2%.

This Is a Very Bullish Chart

Daily volume spiked a few days ago, but is beginning to rise again - always a bullish sign. 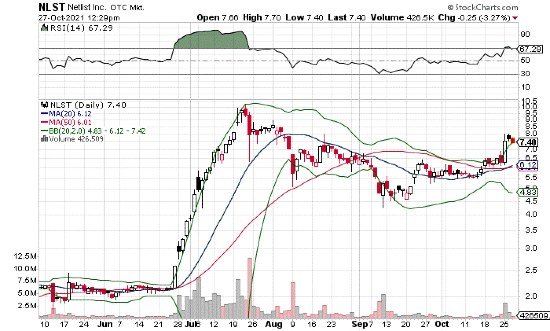 The stock has punched through and is now comfortably above its 20- and 50-day moving averages (MA20, MA50). It's riding near the top of the upper Bollinger band, and its relative strength index reading (RSI) is pushing 70 which, admittedly, takes it close to "overbought" territory, but that's not necessarily a red flag.

In fact, Commandment No. 6 of my 10 Commandments of Trading Penny Stocks says, explicitly, "Overbought can always become more overbought." This works in penny stock traders' advantage almost every time. Low-dollar names have a tendency to run as the crowd begins to become aware of a breakout.

For this reason, low-dollar and penny stocks have a natural tendency to shoot into technically overbought territory. In a big-cap, that'd have traders eyeing the exits, but it's different for penny stocks.

Netlist is benefitting from some favorable business developments, as well. It was involved in litigation with Samsung for "material breach of various obligations" under a joint development and licensing agreement, and a California Federal District Court judge just granted a summary judgement for Netlist. Some traders are "selling the news" on this one, but they should be buying.

Whatever your feelings about tech stocks - love, hate, or in-between - you've got to move when the numbers tell you to move, and that's what they're saying about NLST.

I'm targeting $9 territory with this stock, which is 21% higher from here. Buy this one up to $7.50 and set a 7% trailing stop to protect your principal and your profits.

As a non-tech guy looking to profit from a tech stock, I'm living proof that flexible, open-minded investors who play the right small stocks can realize incredible profit potential.

I'm reading about this groundbreaking new market right now. It's currently worth "just" $1 billion or so, but it could soon be worth $400 billion. In fact, some of the world's richest, most successful investors are moving in, too, like "Shark Tank's" Kevin O'Leary, and big banks like Morgan Stanley. One of those investors has already raked in $316 million. I know a Silicon Valley insider who thinks 23 stocks in this market could jump 1,000% in just 12 months, even though they cost pennies on the dollar right now. Here's what it's all about...