If you follow cryptocurrencies, then MANA coin was on your radar this past week. After Facebook Inc. (NYSE: FB) announced its name change to Meta, the little-known altcoin soared 400%.

Facebook's big bet on the future of metaverse platforms generated a ton of interest in Decetraland, a self-proclaimed metaverse where users can create virtual lands and purchase them using MANA coin. 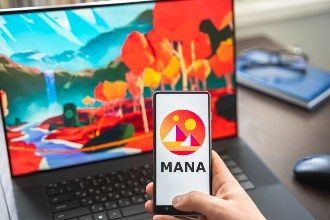 But there's some cause for concern playing into our MANA coin price prediction today. It relates to the future of the Decentraland native token as an investment - and the longevity of the platform itself.

Let's take a look at Decentraland and what's going on with MANA coin.

What Is Decentraland and MANA Coin?

Mana coin is the currency used in Decentraland, a metaverse created for Oculus.

It's an all-immersive virtual reality where you can purchase and explore land, participate in games, and interact with others within the world. It touts itself as the first-ever virtual world owned by its users.

This works through a collection of blockchains operating on a software that runs on Ethereum.

Land in Decentraland is essentially a non-fungible token (NFT). In order to purchase any LAND within Decentraland, you need MANA.

The software leverages the Ethereum blockchain to track ownership of digital land. It also requires users to hold its MANA token within an Ethereum wallet to engage with its ecosystem.

That means the users who own MANA can control changes made to the metaverse by voting on new developments.

Decentraland Is Running Out of Time

It's as if they anticipated the next announcement from Mark Zuckerberg would be a partnership with the semi-established metaverse.

In the short term, a quick move to buy MANA paid off. But what's it going to look like in two years? What will it look like in four months?

People may have shied away from Facebook after recent data concerns and confusion on why one of the biggest companies in the world would rebrand. The timing seems questionable. But the truth is it doesn't matter.

He believes that with an entire world forming around Oculus VR, Facebook's rebrand is hardly a gimmick. It's a calculated pivot into the future.

VR is becoming wildly popular, and its full potential hasn't been realized. But Facebook intends on tapping into it.

It rides on the idea that, soon, you won't have to leave your house to do much. You can throw on your Oculus set and enter a metaverse that offers art galleries, games you can participate in with/against others, workout classes, and even space to attend a meeting with co-workers.

It's not crazy to think about. So many already work from home.

Keep in mind, Facebook is much more than a social media site. It extends to billions of people through several applications including Instagram, WhatsApp, etc...

Zuckerberg and his team didn't plan this giant rebrand only to use a half-baked platform.

They will continue developing their own.

However, it doesn't seem sustainable.

Nick recommends against buying into MANA. If anything, it could be a quick trade while there's still some hype surrounding it, but it's not an investment.

Most analysts agree, too, citing a correction after the hype dies down and reality sets in.

You can expect that correction to head south to a 2022 price prediction closer to $1.20. Looking further into the future, 2025 could bring a price around $2.80.

Don't expect this one to hit $4 anytime soon.