Bitcoin is and has been the undisputed "King of the Cryptocurrencies." It seems like when it can't go any higher, it continues to exceed expectations and price predictions. That's why we want our readers to see the latest Bitcoin predictions. From the plausible to the fantastical, Bitcoin is the sort of asset that can fulfill any prediction. 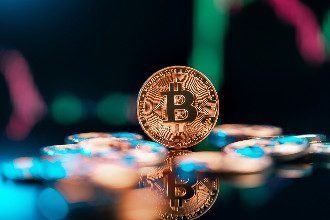 Today it's trading for more than double that.

While no one can see into the future and cryptos are susceptible to harsh, volatile waves, Bitcoin has proved itself an all-around worthy investment.

For those of you kicking yourselves with FOMO, don't let its current price point discourage you from investing in BTC.

Today we're going to show you three Bitcoin predictions that show you why it's absolutely not too late to invest and why Bitcoin has such a high upside.

Let's take a look at where Bitcoin is heading and what will drive its gains into the future.

Bitcoin Predictions, No 3: BTC Gets an Upgrade

It's no secret that Bitcoin transactions can be slow and use up a lot of energy. Some estimates say Bitcoin mining burns more energy than countries like Sweden do in a year. That's one of the big criticisms of the coin.

But a solution for Bitcoin is coming. And we predict it could open the floodgates for even more widespread, mainstream adoption.

Using Bitcoin is not like swiping a Visa card, or a quick Venmo exchange to a friend who bought your coffee. The idea is to work toward those functions, eventually making BTC transactions quick and effective enough to rival our traditional (fiat) currencies.

Bitcoin's latest upgrade is working toward that goal.

The Taproot upgrade is meant to streamline the processing of transactions and make them more speed and cost efficient.

The most significant upgrade in the last four years, it bunches multiple signatures together, making it easier and faster to verify transactions on the network.

It also scrambles transactions with single and multiple signatures together and makes it more difficult to identify transaction inputs on its blockchain, helping to make transactions more secure.

Sure, there's the argument that technology like the Lightning Network is designed to do the same thing, but those transactions still need to be verified on Bitcoin's main network.

On top of higher transaction speeds and safer transactions, Taproot should open the door for more innovative financial applications on Bitcoin's network.

She told CNBC, Taproot will "set the foundation for the next phase of innovation in the Bitcoin protocol. We expect this upgrade to unleash a new wave of innovation in Bitcoin focused mainly on smart contracts."

For that reason, Bitcoin's worth should increase as the number of useful transactions on its network increases.

As CEO of ARK Invest, Cathie Wood has made a killing on Wall Street investing in disruptive technology. She looks for high-risk investments that have potential to transform entire industries.

She has experience with Bitcoin too. ARK has been investing in BTC since 2015, when it was below $500 a coin.

In a September 2020 report created in collaboration with Coin Metrics, ARK identified four major catalysts that could send Bitcoin prices even higher.

Any combination of those very realistic possibilities would drive major gains.

While that report is over a year old, Wood has since become even more bullish on Bitcoin.

In a virtual "Investing in Tech" series hosted by Barron's, Wood told attendees that she expected Bitcoin to rise as high as $500,000.

She compared it to "the early days of institutions moving into real estate and emerging markets. They started out with a half a percent allocation, then [1%], and then 5% or thereabout seemed to be the right number."

If institutional investors made Bitcoin 5% of their holdings, it would push its price into the $400,000 to $500,000 range over the next five years.

Conservatively, Wood predicts Bitcoin will grow 700% in the next five years, and that's not out of the question.

She is very bullish on BTC, but she has the history and research to back up her aggressive prediction.

Of course, a lot has to go just right for Wood's prediction to hit.

For investors looking for a Bitcoin prediction they can act on more immediately, our crypto investing expert is laying out his forecast for 2022...

When Nick Black, Alternative Asset Specialist for Money Morning, went through his cryptocurrency rundown last week, he offered a realistic prediction for Bitcoin in 2022.

He warns investors to block out the noise of doubters with excuses for why Bitcoin has topped, because it's just not true.

Over the course of the next year, Nick expects a spot pegged, physically delivered (meaning the fund has to own bitcoin) ETF will be a major driver for the BTC price.

For those worried about its price being "too expensive," this is still early in Bitcoin's growth stage.

And you don't have to drop five figures and secure an entire Bitcoin to reap those gains. Buy a fraction of a coin, put as little or much as you're comfortable with because the percentage gains will be the same, and will continue to climb.

And if you're someone looking for more crypto predictions, check out the altcoins we're targeting now.