Last week, I mentioned that United States Oil Fund ETF (NYSE: USO) was in a perfect spot to buy in. 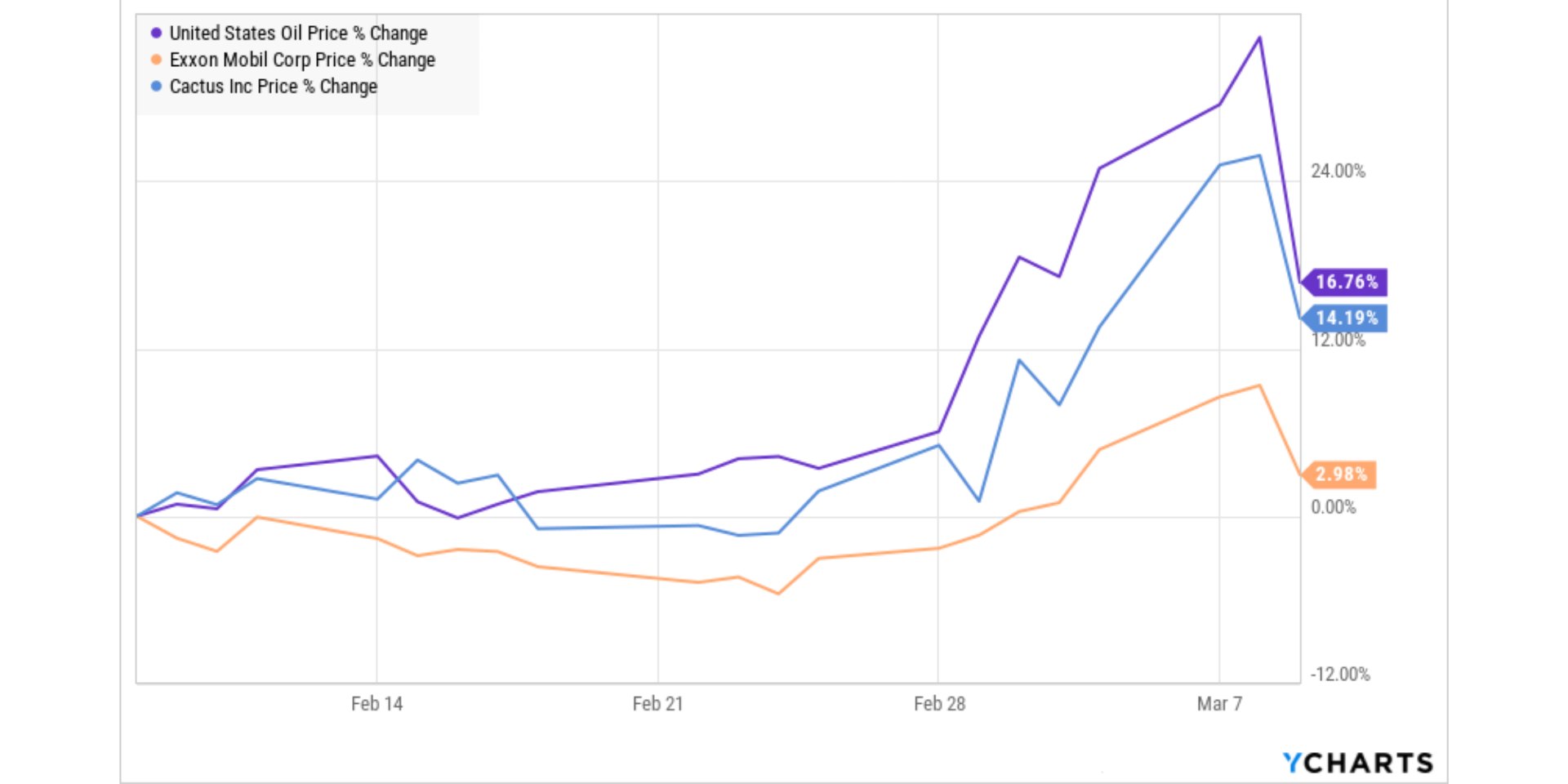 The spike around March 8 was USO shooting up over $87 intraday. Literally four days after I made that call. Not quite at the $90 target yet, but when I said "easy," that's what I meant.

Now, as of today, it's taken a bit of a tumble back down around $75, thanks to the restart of diplomatic talks between Russia and Ukraine and an announcement from the United Arab Emirates that it could increase production to ease supply issues.

From where I'm sitting, this gives you a second chance if for some reason you didn't get in last week. If you did, my advice is to keep hanging on. USO is a high-flyer, and I think it could still go a lot higher.

But there's also an important lesson here: What goes up must come down, and energy bets are no exception.

We're looking at a classic "momentum trade" situation. I want to show you the smart way to get on board and ride this thing higher, take advantage of rocketing energy plays, and set yourself up to profit if they crash back to earth.

Momentum trading (i.e., getting on board an already moving train) is easy to do. For the most part, the sectors and stocks (or ETFs) that track whatever's hot are usually in the news, easily understood, and widely followed narratives. Getting in extra early on momentum trades is simply a matter of grasping what narratives are shaping up before they become news stories and headlines.

Before Russia invaded Ukraine, the biggest in-the-news narratives were inflation and the Fed raising rates.

One of the factors pushing inflation expectations higher has been rising oil and energy prices. Since oil is easy to track and is almost always in the news, you might have gotten into oil as a momentum play on the rising price of oil driving inflation higher or inflation driving the price of oil higher. I did.

In case it needs repeating: The cheapest and smartest way to play oil (and just oil, not oil exploration, or production, or refining, or oil derivatives like heating oil or gasoline) is USO.

USO is an ETF that invests in oil through futures contracts on West Texas Intermediate (WTI), the American oil benchmark traded on the NYMEX. That's what I trade when I want to take a position in oil.

If you bought USO back in the summer of 2021, when USO was trading between $45-$50, the price of oil started rising, and stories about inflation and the Fed raising rates were cropping up like weeds in financial news outlets, you'd have been up around 89% earlier this week.

But you didn't even need to get into USO last summer to be making money on the skyrocketing price of oil. You could have gotten in this January when WTI broke above $80 a barrel and news headlines were screaming about rising oil prices contributing to rising inflation. When that happened, USO was at $60. You could have bought some shares of the ETF then, and you'd be up almost 45% as of Tuesday's USO closing price of $85.43.

Even better, if you're an options player (and you should be playing options smartly, meaning more conservatively than wantonly speculatively), you could have bought call options on USO. If you'd bought any number of call options, with a range of strike prices and expiration dates available back in January, you'd likely be up a few hundred percent now. That's the power of trading options, especially when the underlying instrument you're playing has a lot of fast-moving momentum.

Where to for Oil Prices Now?

While I'd argue no one knew for sure if Russia would actually invade, it was clear as day Russian troops were surrounding Ukraine, which was helping push crude oil prices higher. The invasion and the war have everyone's attention now, and oil prices have soared for all the obvious reasons. That added a tremendous amount of momentum to the USO price appreciation trade, putting it essentially in overdrive.

Now the question is, where will oil prices go from here?

I say they could keep going higher. Simply because there's no end in sight to the war, and inflation is heating up, not abating, precisely because of the war. The supply side impact hasn't even really hit the market yet - right now, we're still speculating on how bad it might be. When it does, there'll be another run-up until we hit a point of demand destruction.

The smart way to get ahead of that is to buy USO on dips, especially below $75. I prefer buying USO shares and not call options because USO's already had a heck of a run, and if it's going higher, it may rise at a more measured pace, which isn't what options traders like. They benefit from big swings in shorter time frames.

That said, if you're convinced we'll see oil spike more in the near future, buying call options is an option.

But - and there's almost always a "but" - if there's some diplomatic resolution to the war in Ukraine (or a ceasefire) and goods and services resume to flow, oil could reverse course in short order - especially if all the latecomers to the rising price trade sell their positions.

So, how do you have your cake and eat it too, or hedge your upside play in this instance? Easy.

You can and should buy put options on USO to offset (or hedge) your purchase of shares in the ETF. Since USO's been rising, the premium on put options has been coming down. Not a lot, mind you - that's because there are a lot of traders already hedging their bets on rising prices, but they're still worth buying.

If you buy shares of USO to catch further upside momentum, you can put a tight stop-loss order down on that position, at maybe 10%-15% below your entry. That would limit your losses if oil prices come back to earth.

If you buy some puts, especially if you can pay for them with any gains you already have on any of your bets on rising energy prices and oil drops quickly - maybe because of short-term dumping of too many long position bets - you can make a quick killing on your put options.

That's how to play the momentum in oil prices rising with a backstop and a downside fat profit potential play in your back pocket.

And by the way, you should be looking at this simple strategy to play all the commodities that are flying high because of inflation expectations and the war in Ukraine.

With market conditions changing so quickly right now, savvy investors need to look at every available option to keep their financial futures secured.

One thing you can always count on no matter which way the market's going is the American entrepreneurial spirit - that's never changed, and it never will. The next job-creating innovator, in the same vein as Bezos, Musk, and Jobs, is hard at work right now in a garage, or a basement, or a rented space somewhere, working to make their vision a reality. They'll need help - folks with the vision and guts to back a good thing.

The reward, after all, could be generational wealth. The trick is finding the right visionary with the right idea - fortunately, we've got some help in this department...