Cathie Wood’s ARK Invest was a poster child for success in 2020. Between the March 2020 “COVID Crash” lows and February 2021, its top exchange-traded fund, ARK Innovation ETF (NYSEARCA: ARKK) gained more than 313%. This made ARKK one of the top-performing ETFs, and thrust ARK honcho Cathie Wood into the spotlight as a top stock picker.

But, since topping out above $158, ARKK has fallen roughly 80%; it’s sitting just below its March 2020 lows. There are not unreasonable fears that Woods’ darling tech stocks can still go lower, given the current macroeconomic environment.

I’ve got my eye on ARK Invest for short-side opportunities ahead of earnings right now.

I spent all Saturday afternoon building a data set around ARK Invest’s roster of ETFs. The data set is expansive – a deep dive into all 132 positions across the firm’s six ETFs.

So, let’s dig into the data set – it reveals some pretty shocking things about the state of the tech sector in general…

Tech Insiders Are Not Buying – And That’s a Problem

My academic focus centers on when and why executives purchase their own stocks. I can’t stress the importance of their buying enough. Insider buying can signal a possible bottom or reversal.

When it comes to the stocks owned by Cathie Wood’s ETFs, executives still are not buying. The chart below is a partial start to my analysis of each stock in those ETFs.

It took a while to collect this data, and it’s not complete.  But I wanted to understand why executives still aren’t buying their own stocks in this environment. The Excel chart you’ll see in a second summarizes the top 25 holdings across Wood’s six ETFs. 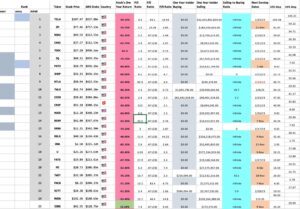 As you can see, there are only four companies in the top 25 stocks where executives are buying the stock, according to SECForm4.com.

At 21 of the top 25 companies in ARK ETFs, not a single executive has purchased their stock in the last 12 months. There has been selling at 23 of the 25 companies, according to the same source. And the amount of selling, in dollar terms, is high.

Tesla Inc. (NASDAQ: TSLA) remains an outlier on this list. Elon Musk himself recently sold around $7 billion worth of his TSLA stock, part of the $32 billion in TSLA shares executives sold over the last year.

But, it’s an outlier, so let’s remove Tesla from the top 25.

When you take Tesla off the board, you see there was $2.04 billion in insider selling in the last 12 months at these 24 companies (Ranked 2-25 on the list)

There has been just $83.9 million in insider buying at these 24 companies in 12 months. That is a 24.3-to-1 insider selling-to-buying ratio at these companies.

This is overwhelmingly bearish, and that matters for us and for ARK. Why are these executives selling, while Cathie Woods is buying? What do they know about the state of “disruptive technology” and the macro pressures that have kept share prices depressed?

I think I found that answer.

I listened to the All-In Podcast on Saturday with venture capital (VC) managers Chamath Palihapitiya, Jason Calacanis, David Sacks, and David Friedberg. They held a critical conversation about the state of Silicon Valley companies - those disruptive ones that Cathie Wood seems so fond of these days.

Two significant things are happening in these markets.

The first is the longer-term trend of the Federal Reserve raising interest rates and the impact on investor expectations.

The Fed has pushed the risk-free rate on the 10-year bond higher and increased the cost of capital for tech firms that might need to return to the market to raise money. Simply put, their hurdle rate – the minimum rate of return they require - is going higher… and that’s just the start of the problems.

Palihapitiya says that the dollar in front of you is now far more important than the dollar down the road. He wisely notes that, with the Fed Funds rate at just 5%, Silicon Valley firms must generate a minimum of 500 basis points above that level.

That puts incredible pressure on companies to produce returns now, and re-prioritizes the need for short-term profits.  “It’s way better to grow at 20% and be profitable than to grow at 100% and burn money,” Palihapitiya says.

The consensus of the hosts is that the tech sector is pivoting from growth to profitability. That puts a focus on “layoffs, cost reductions, and cost savings,” says David Friedberg. Investments in future growth are slashed while timelines for profitability scream forward.

Friedberg then pushes into the second driving factor: Elon Musk.

Friedberg put Musk’s recent vast, deep Twitter layoffs – as much as 50% of the social media company’s workforce – into perspective: “It sets a new standard for how profitable a tech company can get,” he says.

Musk cut Twitter down to the bone, which could set a precedent for a lot of other companies do the same.

It also pulls private equity (PE) outfits into the conversation. That’s where the real fireworks start. Because many growth tech companies might need to go private to survive, and if that’s the case, the valuations that PE shops would be willing to pay are a pittance to valuations from last year.

That opens new wounds for company founders. It creates many problems for companies that are still carrying high valuations and aren’t turning a profit now. Palihapitiya highlighted that the private universe of technology companies is in worse shape.

He shared this chart. At a 10% to 11% hurdle rate, Palihapitiya notes, the companies on the left will need to engage in deep cuts to one day get to the right side of the chart.

Friedberg also notes that of the 200 public software companies on the right of the chart, a large number will “need to go private in order to do the restructuring that the market is demanding that they do in order to get rightly valued.”

Palihapitiya then added that private equity deals will happen at “meaningfully lower levels” than the stock price when these companies went public or under the company’s final private round before its IPO.

He notes that roughly two-thirds of the unprofitable companies “have no line of sight” to profitability in the next two to three years – and most will need to raise future capital at “very egregious terms” to keep themselves going as public companies.

Palihapitiya says 100 of those public software firms might end up as PE deals… which won’t be at favorable terms either.

Why? Because – as he later explains – private equity companies themselves can’t raise debt either, given the current capital environment. “So, what do you think they do?” Palihapitiya asks. “They just pay 50% less than what they were willing to pay before because they have to pay 100% equity checks.”

Wow! And here’s where Cathie Woods and ARK come back in.

Much More Pain Is Coming for Tech’s Former High-Flyers

Many of ARK’s holdings are on that public list… they find themselves in that valuation bucket – a painful place to live.

Of the top 25 positions held by ARK Invest, just four are profitable. (84% have a P/E ratio trading “At Loss”).

From the broader sample of 96 companies, just 34 are profitable. In other words, 64.6% of these companies are unprofitable.

On the tech side – in the larger portfolios – the fintech, software, communications, cybersecurity, and other “innovators” are sprinting headfirst into a recession. Have they pivoted yet? Have they awakened to the current environment and made the necessary changes and cuts? Do they plan to? When?

I’d have to read a lot of 10-K forms. But let’s look at just a handful of these names. Remember that lofty price-to-sales ratios of many tech companies were excused because the expectation of growth was very high.

These are just some lowlights from ARK’s holdings. The list actually goes on and on.

So, why are their executives selling their stock? Because they’re probably going to see their stakes cut even further if they must go the private route.

Here’s How to Play All This Trouble

No less than 21 of Woods’ favorite companies are reporting earnings in the next three weeks, and, as you can probably tell already, I’m inclined to short these with structured put spreads.

But there’s no need to stop there. I’d buy the longer-term exposure to ARKK’s big declines with the AXS Short Innovation Daily ETF (NASDAQ: SARK). It’s the snarky, inverse dark mirror of ARKK, returning gains for each decline ARKK makes.

Given that I expect ARKK to continue to struggle until the Fed pivots, the move will be to remain in SARK.