Wall Street would love for you believe that rising interest rates are terrible for stocks and that there's nothing you can do to defend your money against higher rates... let alone profit.

Higher interest rates by themselves are not bad. In fact, they can be quite good for markets... it's the speed of the rise that's critical.

Today I want to talk about why this is an important nuance and how to identify the best companies - meaning those that can defend your money against higher rates and grow it, too!

Wall Street would have you believe that simply because it's in their interest to have you thinking that way. You'll be uncertain, caught off guard, and probably going to trade more frequently as a result (which generates hundreds of millions in commissions).

The mainstream media doesn't help matters much. This past Sunday, for example, White House budget chief Mick Mulvaney said that rising federal deficits could force interest rates to "spike." And that got a lot of coverage simply because the word "spike" is so dramatic.

At the same time, stronger than average jobs numbers have renewed concerns that the Fed may reduce monetary stimulus and boost rates more aggressively to compensate for growing economic strength. It's a meme being played out across the Internet and on news channels around the world.

Yet, rising rates are not the worry that you're being led to believe they are.

History shows that there have been six major periods of rising rates over the past 30 years. Five out of six times the markets rose significantly, according to Kensho, a hedge fund analytics engine, and CNBC. 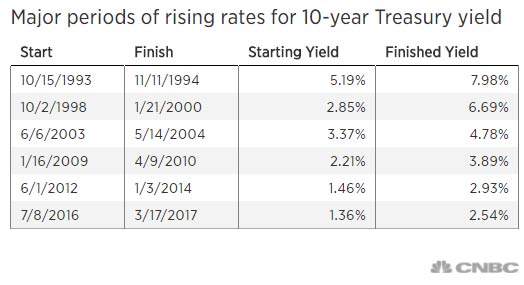 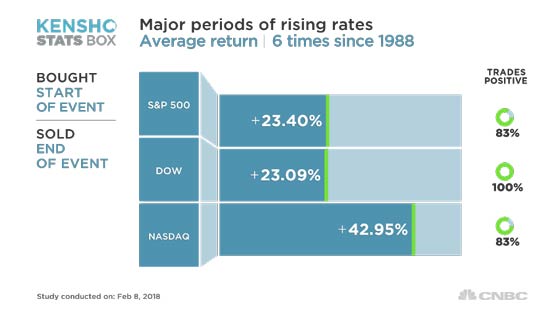 My research - which we've talked about many times in the past - says the same thing. But don't take my word for it.

A 2013 research report from Rob Brown of United Capital Financial Advisors found that stocks declined in only three out of 16 periods of rising interest rates since 1920 and that the average return for the S&P 500 when rates climbed the most was 16.2% - much higher than the 12% return for all periods.

Since 1971, there have been seven periods when the Fed raised rates during which the markets actually gained an average of 19.21% the following year.

There's a good argument to be made for capital acceleration, especially when it comes to IT, consumer discretionary stocks, financials, industrials, and materials stocks.

Not surprisingly, the Kensho data agrees. 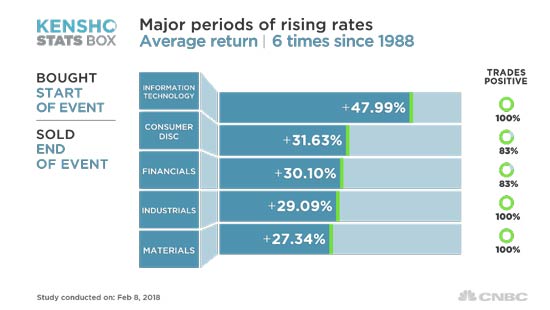 To be fair, there are six very dangerous words in play: "It could be different this time."

At least for us.

Where to Position Your Money to Profit

The key is to buy the "must-have" companies that I'm always talking about - all of which are aligned with our Unstoppable Trends - because they have the ability to protect margins.