The solar industry has finally reached "grid parity" with fossil fuels, which has been the goal since solar panels were first invented in 1954. As energy investors know, reaching grid parity will open a massive profit opportunity for the renewable energy sector.

So today, we're bringing you the best solar ETF in 2017 to profit from this huge energy shift. 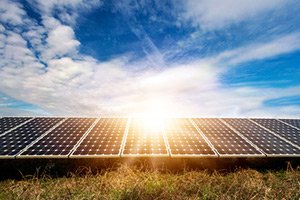 Grid parity means consumers can generate electricity from solar sources at or below the price of hooking up to a traditional electric grid. Solar's biggest obstacle has always been its cost. Now that solar is achieving grid parity, the solar sector is on the verge of dominating the energy industry. In 2016, solar energy made up 40% of all new electricity generating capacity, 70% more than natural gas, the second-highest source.

Solar energy will grow even more now that grid parity is here, which makes this the perfect time to invest in a solar ETF.

We also recommend a solar ETF, because they are much safer than trying to pick the right solar stock. The industry is still young, and a lot of solar stocks are speculative bets. But a solar ETF lets you profit as the industry grows without having to invest in just one company.

However, not all solar energy ETFs are the same.

Public companies in the solar industry are wide-ranging, from parts suppliers to those that sell the energy directly, and you want an ETF that gives you broad exposure to the whole industry.

Today, we've done the research for you and have found the best solar ETF of 2017...

The EIA forecasts solar energy production will grow nearly 60% by 2018. But now that the solar industry is nearing complete grid parity, that growth rate could be even higher. The closer solar costs are to fossil fuels, the more lucrative solar energy investing becomes.

Plus, "residential" grid parity is being achieved across the country, which means you can power your home with solar energy for the same price as it would cost to pay the local energy company.

But that's not all. A December 2016 report from the World Economic Forum says solar power is at parity with fossil fuel in more than 30 countries, and could reach two-thirds of the world in "the next couple of years."

First, the sun supplies a limitless amount of free energy. Unlike natural gas and oil, the supply can't dwindle and it can't be trapped in difficult to reach places, like shale rock or underneath the oceans.

The difficulty of producing fossil fuels leads to price fluctuations and unstable profits for the companies involved. For example, some shale oil formations aren't profitable for oil companies unless the price of oil rises above $70 a barrel. That's not an issue for solar.

While natural gas produces about half the carbon byproduct of coal, it still emits carbon dioxide into the atmosphere. That's an important consideration for investors as governments attempt to combat climate change by regulating emissions.

A 2015 survey by Clean Edge found 87% of Americans believe renewable energy is important to America's future. And 50% considered solar the most important energy source for the future, roughly three times the number who said the same for oil.

Until now, the only problem for solar energy has been its costs compared to fossil fuel rivals. The same survey found 82% of respondents said saving money was a "primary motivator" to use clean energy.

But with solar costs plunging to 1/150th of their 1970s levels and complete grid parity within reach, consumers will soon be able to fully unlock the power of solar energy for less than traditional power sources. An April 2017 EIA report of levelized cost estimates for new power generation in 2022 showed solar power will cost an average 58.1 $/MWh compared to conventional natural gas' average cost of 58.6 $/MWh.

On top of that, the EIA predicts solar energy will be actually be cheaper than conventional natural gas for electricity plants by 2022. Solar power won't just be at grid parity, but it will be supplying the grid.

Make no mistake, solar energy is at the tipping point of transforming the entire energy sector now that its costs are leveling with fossil fuels.

Investors ready to capitalize on this profit potential shouldn't wait to get into the market, and this solar energy ETF is perfect way to do it...