As hard as it is to believe, Labor Day's right around the corner.

I'm watching something else.

It's happened in eight of the last 10 years in the weeks leading up to and shortly after the holiday.

It's got the power to put triple-digit gains in your pocket – in less than two weeks.

Fatten Your Pockets Trading Currencies Before and After Labor Day

The CurrencyShares Euro ETF (NYSE Arca: FXE) tracks the euro versus the U.S. dollar. While many people try to fundamentally predict where these two currencies will trade at any given time using global economics, I prefer to spot those historically high-probability, short-term moves of an asset.

Now I realize this may seem like a bold statement to make. So let me show you the best way I know how… with quantitative data: 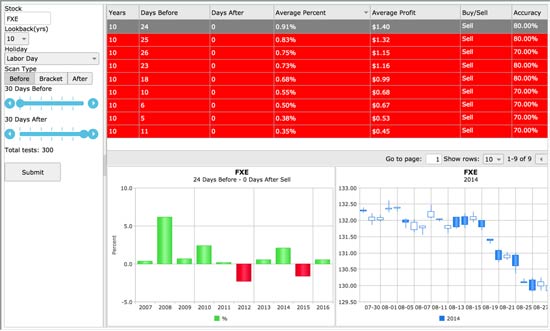 In the table above, you can see where I've used my proprietary tools to scan and back test the past decade on FXE to see how this asset's moved in the 30 days before Labor Day. Now as a pattern trader, I like to see "bunching," meaning I want to see a move in the same direction over a variety of days.

Based on the data above, we can see a bearish movement in this ETF lasting anywhere from six to 26 days…

…which tells us that the topline best pattern to play is a bearish one on FXE during the 25 days leading up to Labor Day. Historically, doing so resulted in a .91% average drop in the price of the ETF, which is a great for profits in a bearish position.

So what does the data say about trading FXE after Labor Day?

Tom, are the .91% bear profit in the text preceding the blue FXE chart and the .93% bull profit in the text following the chart typos? The decimal point indicates profits less than 1%. I believe the appropriate trades would be an at market, in the money Sep 01 Put and an at market, in the money Sep 07 or Sep 15 Call. I also believe you have a more elegant solution; what is it?

I hope to be rich

I'm tunisian players and youtuber a.d I I hope to take many money