The United States’ reliance on unconventional sources of oil and gas has increased dramatically over the past few years. This increase was fueled by concerns over energy security and the costs associated with oil and other fossil fuels. This U.S. shale boom has created a new type of energy firm: fracking companies. 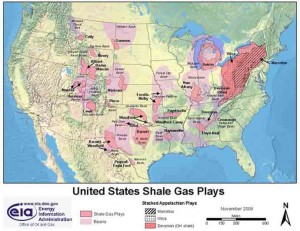 The characteristics that define fracking companies are not strict. Hydraulic fracturing – or “fracking” – is a multifaceted operation. There aren’t fracking-exclusive companies so much as there are several different firms involved in each step of the process.

And the process itself is constantly improving.

Today, the method used to extrapolate oil and gas differs greatly from those utilized when fracking was first introduced – which goes as far back as the Civil War. Because an actual comparison between the two could be an article in and of itself, I’ll explain the modern process of hydraulic fracturing and go from there.

The first part of the process involves cracking into rock formations. Water is then injected into these fissures to force them further open. In addition to the water, chemical additives and "proppants" such as sand and ceramic particles are pumped into the fracking well. The proppants literally “prop open” the fractures, allowing the gas and oil to flow freely into a wellbore, where they are pumped back to the surface.

Though it seems highly intricate, this process has been simplified and technologized over several decades. Most advances achieved in the fracking process were reached within the past few years. In 2010, it took 40 days to drill the average well in the Eagle Ford Shale Reserve. By 2013, that amount of time had been cut in half thanks to improvement in drilling-technology and the overall fracking process.

The most successful of these firms have been extremely profitable over the past few years – and profitable for investors as well. Let’s look at the most prominent fracking companies that deal with some of the components involved in the process.

15 of the Most Prominent Fracking Companies in the U.S

The largest U.S. companies invested in fracking operations today are Chevron Corp (NYSE: CVX), ExxonMobil Corp. (NYSE: XOM), Halliburton (NYSE: HAL) and ConocoPhillips Co. (NYSE: COP). These corporations are energy producers whose upstream operations include oil and natural gas exploration and production but do not focus exclusively on it. Likewise, these corporations have the largest share in specific projects, making them the chief project operators. For example, having paid $29 billion for its foundational-stage development, Chevron now manages the Gorgon Gas Project in Australia. The site extracts liquefied natural gas (LNG) from the Greater Gorgon gas fields at the rate of 3 million barrels per day.

Smaller fracking companies exist all over the world, oftentimes within the same area. For example, the Bakken formation, which is about 200,000 square miles in parts of Montana, North Dakota, and Canada, is a hotbed for tight-oil extraction. Within this formation alone, there are a number of publicly traded oil and gas companies: EOG Resources Inc. (NYSE: EOG), Continental Resources Inc. (NYSE: CLR), Whiting Petroleum Corp. (NYSE: WLL). Marathon Oil Corp. (NYSE: MRO), QEP Resources (NYSE: QEP), Hess Corp. (NYSE: HES), and Samson Oil and Gas Ltd (NYSEMKT: SSN). Several firms with tight oil proficiency and holdings in formations like the Bakken are prime targets for takeovers, which is exactly what happened to XTO Energy in 2010 by ExxonMobil.

One of the reasons for the recent price drop in oil is the increase in tight oil production.

Which brings me to the companies responsible for components of the production process. These commodity enterprises deal with the proppants: sand and water. U.S. Silica Holdings (NYSE: SLCA) is a major player in this realm. In fact, SLCA is a major fixture in almost every fracking endeavor in the U.S. SLCA mines, processes, and sells commercial silica in the U.S. As rock formations like the Bakken Shale, the Barnett Shale, Marcellus Shale, and Raton Shale are developed, the need for fracking sand increases.

Another commodity integral to fracking is water. The process creates a lot of wastewater that has been the central topic of many federal and state-level debates. “Produced water” is the byproduct of hydraulic fracking – it occurs naturally when gas or oil is extracted, rising to the surface alongside liquid and gaseous hydrocarbons. Handling produced water is an $18 billion process. It is difficult and expensive to filter out the water from the oil and gas. Altela Inc. uses a natural solution to desalinating produced water through the use of patented technology. Currently, Altela is treating the water in the Marcellus Shale formation.

Last but not least are the companies responsible for natural gas transportation and distribution. The safest method of transportation is the pipeline, designed to efficiently move natural gas from its place of origin to where it’s in high demand. Spectra Energy Corp. (NYSE: SE) is one such fracking company, serving three key factors in the natural gas chain: gathering and processing, transmission and storage, and distribution. Currently, Spectra operates strictly in the North American region, which is an area on the verge of prospering as more and more shale reserves are tapped into.

The Bottom Line: There are a lot of “fracking” companies involved in oil and gas extraction. This means that there are just as many investment opportunities.
Latest News