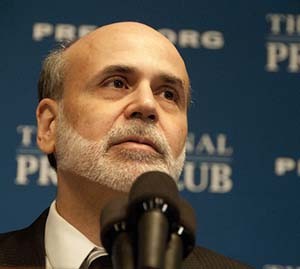 Apparently former U.S. Federal Reserve Chairman Ben Bernanke thinks some Wall Street executives should have gone to jail for misdeeds during the financial crisis of 2008.

"While you want to do everything you can to fix corporations that have bad cultures and encourage bad behavior - and the Fed was very much engaged in doing that - obviously illegal acts ultimately are done by individuals, not by legal fictions," he said in an interview published by USA Today on Sunday.

It's true that seven years later, not a single Wall Street bad actor has gone to prison over the credit crisis - even though it dwarfed the savings and loan scandals of the 1980s for which 1,100 people were prosecuted for white collar crimes, including top executives of the large failed banks.

But the statement coming from Bernanke is loaded with hypocrisy. He played a major role in tanking the U.S. economy himself...

Ben Bernanke's Role in the Financial Crisis of 2008

"Bernanke knows good and well that the Fed contributed to the Financial Crisis and to the aftermath that still plagues markets today - and that his actions in particular contributed; yet, he's not going to admit that," Money Morning Chief Investment Strategist Keith Fitz-Gerald said on Monday.

You see, under Bernanke's hand, the U.S. Federal Reserve began printing money to presumably create economic value (a policy called "quantitative easing") in November 2008. It bought $4.5 trillion in assets until QE was halted in October 2014.

"QE eviscerated the dollar. Bernanke believed printing money was the same thing as raising prices by managing inflation," Keith Fitz-Gerald pointed out. "In fact, inflation is actually defined as the artificial increase in the supply of money and credit. It's a tax by any other name. So what Bernanke and the Fed really did was artificially tax the American public by debasing its currency and forcing millions to take a pay cut at the same time."

"There's a mountain of evidence QE has never worked, will never work, and was absolutely the wrong decision," Fitz-Gerald said. "Yet Bernanke and the current-day Fed under Janet Yellen continue to play along with the illusion."

As for exactly who should've gone behind bars, Bernanke kept mum.

"He's right, there should have been people who went to jail. But for him to say that, and then not name any names, is absolutely disingenuous," Fitz-Gerald said. "Worse, it's bait-and-switch of the worst kind - pointing attention somewhere else without acknowledging Fed's role."

The closest Bernanke came to showing contrition was this rare, emotional moment during the interview: "Every time I saw a bumper sticker which said, 'Where's my bailout?' it hurt."

Not quite an admission of fault, but at least he has a semblance of recognition that American taxpayers were extremely dissatisfied with how he maneuvered the financial crisis.

"That good because it indicates that Bernanke has at least an inkling that the Fed's actions have harmed hundreds of millions of Americans by eviscerating their financial future and vaporizing their savings," Fitz-Gerald said. "The Fed saved the financial system at the expense of the taxpayers, whom they sold down the river. If you were rich, you got a bailout. If you were poor, you got a handout. If you are Middle Class, you got sold out. "

First, bring back the Glass-Steagall Act or some clearly defined version of it that carves off commercial banking activities from merchant banking services while also defining relationships with securities firms. It worked for a long time because it prohibited investment banking firms from gambling with depositors' funds held in affiliated commercial banks.

Second, "the Fed should force banks to choose in concert, effectively telling the financial markets that they need to be either commercial banks or merchant banks. We don't care which - you decide. But come a specific point in time we are no longer backing any bank trading derivatives anywhere on the planet," Fitz-Gerald said.  "That would single-handedly remove banks' ability to collateralize their exceptionally risky trading activities using taxpayer assets."

Should We Abolish the Federal Reserve? Millions of Americans assume the Fed acts in the nation's best interest and that our nation has always had a Fed. In fact, neither is true. You see, the Fed's original, century-old purpose no longer applies to modern-day markets. Far worse than that, the Fed's actions actually damage the U.S. economy...

can a person still believe in good government? it seems most corporate, governmental and financial empires are running(ruining) the world affairs in nefarious fashion,. is it time for truth or even revolution by the many? maybe not..but it might be the answer. meanwhile we have wars raging all over the place and more to come. we never learn it seems. greed is paramount!