With gold reaching five-month highs, it does appear that it is time to take another look at gold shares - specifically this gold mining stock favorite of ours. 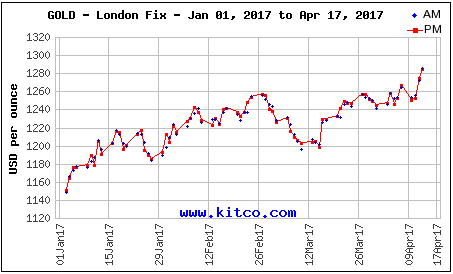 Shares of companies that mine - and more importantly own - supplies of new gold do well when gold and other precious metals are on the move higher. Production expands to meet new, higher demand and profits rise, as well.

Indeed, gold is now trading more than 14% above its November 2016 low of $1,124.30 per troy ounce. Putting that into context, it also means that gold has already reclaimed half of its losses suffered from last year's peak. That is a market on the move!

There are many factors influencing the price of gold. They include inflation, the trend in interest rates, and the strength in competing assets such as stocks. Gold is often used as a safe haven to protect investors from times of market volatility and rising interest rates such as we see right now. Most buyers treat gold as a long-term hedge rather than a short-term profit opportunity.

After all, when interest rates move higher, businesses tend to borrow less and expansion is scaled back. Stocks that are priced to perfection become vulnerable to declines, and bonds, because they move in the opposite direction to interest rates, lose value.

Where is an investor to hide? Cash under the mattress still pays virtually nothing, as the Fed is still only beginning to raise short-term rates. The interest rate on risk-free, short-term U.S. Treasury Bills is barely above .5%. That is one half of one percent! That does not even cover the current U.S. inflation rate at 2.5%.

While gold does not pay interest or a dividend, it does not lose value as inflation and interest rates rise. In fact, inflation makes gold look more attractive, and that means investor demand for gold will rise.

The question is which gold mining stocks are the best.

Why This Is Our Favorite Gold Mining Stock