[“Hot Stocks” is a new Money Morning feature that analyzes the investment outlook of global companies that are in the news. This is the second installment of this ongoing investment series.]

Advanced Micro Devices Inc. (AMD) will spin off its computer chip plants and receive a cash infusion of as much as $8.4 billion from an Abu Dhabi sovereign wealth fund as the scrappy semiconductor firm struggles to compete with Intel Corp. (INTC), its larger rival.

The Sunnyvale, Calif.-based AMD last week unveiled an “asset lite” strategy that calls for it to sell off its semiconductor-production operations, a move analysts say relieves the smaller chip company of the burden of trying to maintain manufacturing parity with Intel, its much-larger arch rival and neighbor in Silicon Valley.

AMD will transfer about 3,000 employees to Foundry, which will be a U.S.-based company. The deal is subject to review by the Committee on Foreign Investments in the United States. There  are no plans to take Foundry public, ATIC and AMD said.

The advanced-technology sector is a “high-value, knowledge-based industrial sector that’s well-aligned with the United Arab Emirate's broader economic diversification ambitions,” said ATIC Chairman Waleed Al Mokarrab. ATIC is based in Abu Dhabi, and is a government-run capital-investment organization that views the advanced-tech sector as a perfect long-term fit, he said.

With 2007 revenue of $6.01 billion, AMD is much smaller than Intel, which posted revenue of $38.33 billion for the same period. Even so, AMD once had a manufacturing edge over Intel – an edge the smaller company has susequently lost because it’s been unable to make the same investments as Intel in increasingly efficient manufacturing processes.

In July, however, AMD reported its seventh consecutive quarter of losses, and replaced Hector De Ruiz as chief executive.

Plans call for ATIC to pay AMD $700 million in cash for a 55.6% stake in the new company. ATIC will add another $1.4 billion to the new Foundry Co. operations immediately, and promises to invest between $3.6 billion and $6.0 billion on new facilities over the next five years.
AMD also will get to transfer $1.2 billion of its debt to the new company. AMD had $5.3 billion in debt as of mid-year, and wrote down its $5.4 billion investment in graphics chipmaker ATI in 2006, recording $2.4 billion in impairment charges.

As part of this deal, AMD also will receive an investment from Abu Dhabi's state-run Mubadala Development Co., which is boosting a stake in AMD that it first acquired last year.

In return for its outlay, Mubadala will get 58 million newly issued AMD shares and warrants for 30 million more. It also gets the right to nominate someone for AMD's board of directors.

Between that deal and $700 million in cash AMD is getting from the Abu Dhabi-backed Advanced Technology Investment Co., AMD's assets will balloon by more than $1 billion, analysts say.

“This isn't sleight of hand – this is a very hefty investment that helps clean up AMD's balance sheet," JoAnne Feeney, an analyst with FTN Midwest Securities Corp., told The Associated Press. "This is the beginning of turning AMD around."

The Growing Power of SWFs

Founded in 2002, Mubadala is the investment arm of the Abu Dhabi government in the United Arab Emirates. The oil-rich emirate created the firm to lure strategic developments in such sectors as aerospace, technology, energy, health care, real estate, hospitality, infrastructure and education of sectors. Mubadala manages a $10 billion portfolio of some 50 companies, and is emblematic of the sovereign wealth funds that governments worldwide have created to invest their growing foreign reserves.

Sovereign wealth funds currently control an estimated $3 trillion. That’s already believed to be more than the $1.5 trillion to $2 trillion held by worldwide hedge funds (though some sources put the hedge-fund estimate as high as $5 trillion).

The International Monetary Fund (IMF) and other experts predict the state-run venture funds could control $12 trillion by 2015. But
Money Morning Investment Director Keith Fitz-Gerald thinks the ultimate total will actually be much bigger: Even now, he estimates that the total capital under the control of the global Cash Barons is more likely to reach $20 trillion by the middle of the next decade. [To fully understand the growing power and influence of sovereign wealth funds worldwide, check out this Money Morning report: “Three Ways to Profit From Sovereign Wealth Funds: The Next Wall Street.”]

Acknowledging the machismo of Silicon Valley in general – and the chipmaking industry specifically – AMD founder Jerry Sanders once proclaimed that "only real men have fabs,” MarketWatch.com reported.

Sanders meant that while many chip companies design semiconductors and outsource the manufacturing, AMD enjoyed the relatively rare advantage of owning its factories, known as fabrication plants, or “fabs.”

By spinning off its fabs, AMD will focus on the actual design work, making itself over into a “leaner, meaner” rival for Intel. But it’s shedding the trappings of a typical semiconductor company – especially since AMD, the world’s No. 2 chipmaking firm, is one of the few companies on the planet that makes chips that are put to widespread use as the central “brains” of personal computers.

It’s a major shift. But experts said the move had to be made.

"This had to be done," Crawford Del Prete, an analyst for International Data Corp., told MarketWatch. "The funds required for capital investment in semiconductor fabrication are immense."

Doug Freedman, an analyst with American Technology Research, says the move answers a key question that’s been on the minds of AMD shareholders: How can a cash-strapped AMD keep up with Intel in an industry where the bar is consistently raised higher?

In a research note to clients, Freedman wrote that “we can [now] say without a doubt that AMD has answered the question of how it will stay in the CPU race with leading-edge process technology.”

AMD is planning $900 million in capital spending this year, compared with $11.2 billion in planned spending by Intel. That’s significant, given that the two firms control all but a sliver of the computer semiconductor market (the so-called “x86” microprocessor market), with Intel holding a hefty market share lead with a market share of more than 80%,
The Financial Times reported.

Plus, Intel has beaten AMD to the newest level of circuit-miniaturization, with circuit widths of 45 billionths of a meter having been achieved, according to recent news reports. Intel also has questioned whether AMD can make the investment needed to move up to the next size of circular wafers – 450mm – from which chips are cut, The FT said.

Not everyone is bullish on AMD’s new strategy. Del Prete, the IDC analyst, says the move could backfire by providing Intel with another key competitive advantage – complete control of its manufacturing operations, something AMD will no longer have.

“For AMD, it means [it loses] control," Del Prete said. "The challenge for AMD will be to leverage The Foundry Co. in a way that will keep their process technology close enough to keep pace with Intel."

Conversely, however, AMD could become more vulnerable in the event of a vicious price war with Intel, similar to what has happened to makers of memory chips.

"The danger is they will have higher variable costs for their chips than will Intel," Brookwood told MarketWatch. "If they go into a really serious price war, the kind that memory suppliers have, that could be a vulnerability because Intel's variable cost is going to be lower."

Analyst Steve Allen of Sierra Tech Research echoed this view, saying that Intel will continue to "invest heavily for capital equipment" and in "fab upgrades during economic downturns."

And that means that Intel “probably extends [its] lead in process capability,” he told MarketWatch. 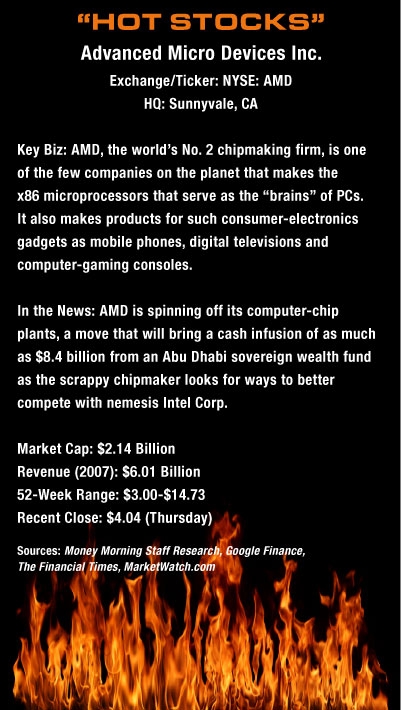 […] unknown wrote an interesting post today onHere's a quick excerpt[“Hot Stocks” is a new Money Morning feature that analyzes the investment outlook of global companies that are in the news. This is the second installment of this ongoing investment… Money Morning is here to help investors profit … […]

Hot Stocks: Intel Posts Earnings Surprise Because the “Atom” Was No Bomb