Despite all of its best hopes, Wall Street will never escape what's happening in the Eurozone.

The 1 trillion euro ($1.3 trillion) slush fund created to keep the chaos at bay is not big enough. And it never was.

Spanish banks are now up to their proverbial eyeballs in debt and the austerity everybody thinks is working so great in Greece will eventually push Spain over the edge.

Spanish unemployment is already at 23% and climbing while the official Spanish government projections call for an economic contraction of 1.7% this year. Spain appears to be falling into its second recession in three years.

I'm not trying to ruin your day with this. But ignore what is going on in Spain at your own risk.

Or else you could go buy a bridge from the parade of Spanish officials being trotted out to assure the world that the markets somehow have it all wrong.

But the truth is they don't.

EU banks are more vulnerable now than they were at the beginning of this crisis and risks are tremendously concentrated rather than diffused.

You will hear more about this in the weeks to come as the mainstream media begins to focus on what I am sharing with you today.

The Tyranny of Numbers in the Eurozone

Here is the cold hard truth about the Eurozone.

European banks reportedly will have more than 600 billion euros ($787 billion) in redemptions by the end of the year. They come at a time when the banks have sustained billions in capital losses they can't make up.

Worse, they've borrowed a staggering 316.3 billion euros ($414.9 billion) from the ECB through March, which is 86% more than the 169.8 billion euros ($222.7 billion) they borrowed in February. This accounts for 28% of total EU-area borrowings from the EU, according to the ECB.

There will undoubtedly be more borrowing and more losses ahead as interest rates rise further.

The process will not be pleasant:

Unfortunately, this vicious cycle is already under way.

The Big Boys Go on the Offensive

On Monday, Spanish 10-year bond yields pushed up to 6.07%. (Yields and prices go in opposite directions. If one is rising, the other is falling.) They relaxed slightly on Tuesday, but... 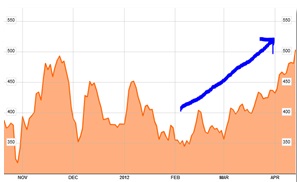 Credit default swaps pay the buyer face value if the borrower - in this instance Spain - fails to meet its obligations, less the value of the defaulted debt. They're priced in basis points. A basis point equals $1,000 on each $10 million in debt.

Wall Street sells them as insurance against default.

In reality though, they are like buying fire insurance on your neighbor's house in that you now have an incentive to burn it down.

Let me briefly explain how the playbook works.

The big boys are going on the offensive and pushing the cost of insuring Spanish debt to new highs because they know that the Spanish government prefers more bailouts to pain. It's the same thing they did with Greece, Ireland and Italy.

At the same time, they're shorting Spanish debt knowing full well that there will be massive capital losses as Spanish bonds deteriorate.

What these fiscal pirates are counting on is the ECB and Spanish government riding to the rescue.

At that point, they will sell their swaps and go long Spanish bonds, thus netting themselves a two-fer.

How to Play the Eurozone Crisis

This could be a good thing for savvy individual investors-- at least temporarily.

The markets have become addicted to bad news. We cheer when central bankers step in with quantitative easing, conveniently forgetting things are so terrible we "need" it in the first place.

We'd rather take one more "hit" than step away from the narcotics of cheap money.

That's why I expect a rally when the ECB is forced to step in no later than Q3 2012.

Here's what to do ahead of time:

At the end of the day, thinking about all this is no fun. I know - I get paid to do it every day. When the fundamental environment is such a wreck, it can wear on you. It certainly does on me.

That's not actually so bad, because big down days are actually profits in the making; it's how you deal with them that makes the difference.

I go broadly along with your analysis, Keith.
However I think that the Fed will invtervene with a supplementary QE earlier than the BCE, first, because the FED is more pro-active, and secondly because the US cannot afford rising interest rates nor a rising Dollar. The debasement of the Dollar is even a basic element of Fed and administration policy.
Of course that's not a reason for me to buy the Euro, far from it, with the two electoral hurdles in France and Greece just around the corner. But do not forget the fact that CME is heavily overbought in Dollars speculating on the Euros demise for 2 consecutive years already. I firmly suspect FED and BCE being in a secret agreement defending a trading range between roughly 1.2950 – 1.3350, give or take a 100 pips.
A disintegrating Euro would course re-deal the cards alltogether, but in such a case I doubt Gold will go much lower, or if so temporarily only. The USD is not a viable alternative as long as US politicians dont get their fiscal house in order. Nothing will happen on this front before the election, and I very much doubt any improvement for 2013. American politicans are even worse than European politicians, which admittedly is not a rejoicing perspective.
China will take care of putting the US money printing privilege down the drain. You may thank Dick Cheney and his puppet GWB for having started the drive of the US over the cliff.
I recommend you read Emmanuel Todd's book "The end of the empire", written before the start of the Irak war. Its conclusions are terryfing but becoming truer and truer every day.

Hi Keith – Thanks for the blow by blow. Here is another perspective to consider if you believe in prophecy. David Wilkerson gave a prophetic word over 40 years ago that Europes economy was going to go under and when it did, it would bring the U.S. economy down with it.
I find your articles easy to understand and your information as well as others lining up with Davids prophecy. We have unfortunately reached the point of 'no return'. Am following the Euro Zone with an eagle eye.

i like this newsletter and go to know about situation of world!

I'm a bit confused about Keith's comments on gold and silver. Keith says gold could get whacked as far down as $1,500 an ounce (gold's around $1,670 right now) but that he thinks silver's retracement won't be as deep or probably as steep and he see's $20-22 as a very attractive price. ?

If Spain really begins to crumble (as I think it will) and the EU continues it's downward spiral (which I think it will) people will of course run to the US Dollar (stupid) but they will also run to gold and silver. They will run to the dollar first and then into the precious metals. So we might see a slight drop in the prices of gold and silver but a drop clear down to $20-$22 silver is pretty difficult for me to see. If silver does fall that far you better believe I won't be the only one in a long line of folks clammering to buy the 'devil's metal'.

The IMF recently stated that there is a problem in Europe, and that it may break up. This is an understatement the situation was created in the 1990s with Credit default Swaps and fraudulent actions by Insurance giant Zurich, and its CDS issued by its subsidiaries AIG and its London AIGFP unit.

There is no plans in place should Countries leave the single market, causing the EU to break up. Its likely and now serious and deteriating and may be worse than pundits predict.

The financial crisis Bank losses and the bailout in 2008-9 just shoved the banking collapse away for a while, but the crisis with Insurers and Banks is still here. And no amount of paper money printed will solve the situation, Bank leverage is perilously high and it won’t take much to tip banks over the abyss.

Other factors like Italy and Spain are now having a visible effect on the euro zone and investors are now in fear of an impending collapse. China for example is buying huge quantities of Gold and so are Central Banks. The BIS stockpiles being hoarded now in its vaults are staggering.

It is terrifying the situation is now worse than it was in 2008 and there will be Bank failures. I remember reading that the 2007 CDS market had a hypothetical value of $50 Trillion. AIG at the time had greedily issued around $450 Billion in CDS. When Mortgage backed values fell, AIG had to find about $15 billion it didn’t have. Leading to AIG and its Parent, (Zurich Financial Services) being rescued bailed out and taken over by the US Government in a massive $800 Billion Bailout of Banks.

The IMF Governments and Central banks know the Bailout hasn’t worked and the situation is now dangerous and may cause a run on the already unstable Banks possibly leading to panic public unrest and riots.

Further recent events like the IMF being given £10 billion by the UK to part fund another bailout of the euro zone today is not much better than burning the money in a bin. It will take € Trillions and no Government has the guts or money to fund such a staggering bailout of a lost cause.

The FED will stop printing when treasuries start melting like greek bonds.

13/05/12 Thank you Harry Morgan. For pointing out that we must think for ourselves because there isn't always a H. Morgan around. Frank Dresen

I am an avid reader of your newsletters but one thing has never been stated is…if you are a millionaire or pauper and the financial system unravels…no one will be safe in their homes including the wealthy. So focus on fixing the problem instead of greed. The world needs a fix, not a reason for war or thousands of home invasions daily. We have no choice but to fix this problem as there really is no alternative.